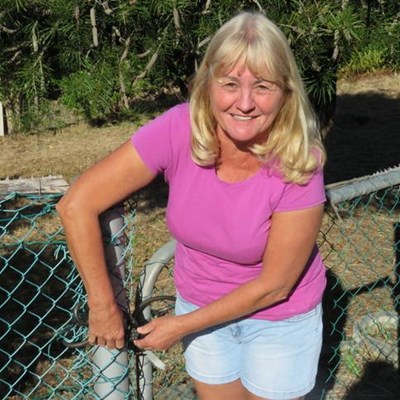 No threats can stop her. Margaret MacKay showing the padlock on one of the garden gates at the old magistrate's house [known as the house of horrors] in Agnar Street which she personally bought and installed. Photos: Elaine King
KNYSNA NEWS - A bucket of urine and faeces chucked over her body, face and hair, and death threats will not stop the feisty Margaret MacKay who is on a "warpath" to keep vagrants out of the Knysna "house of horrors" in Agnar Street, since this house is directly opposite hers.
This house, owned by the Department of Public Works, was first exposed by the Knysna-Plett Herald on May 12 for being a blight on the neighbourhood and a haven for drugs and crime.
The Knysna municipality then appointed an independent contractor to clean it up two weeks ago, since no action was taken by Public Works. The house, which was completely trashed, and had rooms covered in rubbish and human excrement, was boarded up "clean" more than a week ago.
Illegal dwellers back again
But this had not stopped the previous illegal dwellers from trying to return "home", and it has made MacKay all the more determined to stop this from happening.
Armed with a firearm and three fierce-looking big dogs, MacKay goes across the road every single morning and evening to stop the vagrants from returning – and she says she will keep doing this irrespective of any actions or several death threats against her.
Death threat
Even one of the dweller's threats when she bumped into him in Gray Street – "to f***ing kill you" – is not going to stop her, she says.
MacKay has lived at number 2B Agnar Street since the end of April this year, is a single woman and a pensioner who says her image of Knysna has changed dramatically owing to what she has experienced here. "During this time [since she moved into her house in April] my life has been a living hell due to the fact that the house in front of mine is occupied by drug addicts and prostitutes."
Having moved here from Johannesburg, Mackay says she may as well have moved into the notorious Hillbrow.
Speaking to the Knysna-Plett Herald she tells her story of having faeces thrown at her, having to go home and remove her defiled clothes and even crying, so horrible was this episode.
Affidavit and assault charge laid
In an affidavit to the police when she laid a charge of assault against the illegal dwellers last week, she says: "Last week the municipality removed these people and boarded up the doors and windows to make the house secure and stop the invasion of squatters. After many letters to get this done, I in turn promised to keep an eye on the house and report any problems.
"On Sunday, July 10, I saw a man in the garden of this house and when I went to him and said he was trespassing, I found he had broken one of the boarded doors down. I asked him to leave and he said he had until Monday to do so.
"When I went to the house on Monday morning there were five coloured males in one of the rooms smoking dagga. A shouting match ensued and one threatened to stab me with a screwdriver. I came back to my house and called the police, but when the police arrived three hours later the men were gone."
She said she then went to Builders Express, bought wood and nails, and with the help of her gardener/handyman boarded up the door that had been smashed in. "I also bought padlocks and locked the garden gates."

The verandah in front of the house where some of the rubbish that came out of the house still lies. MacKay has made it her responsibility to put it all into black bags and get rid of it.
Contents of 'toilet' thrown at MacKay
However, on Tuesday morning, July 12, MacKay had the worst experience she can recall.
"This morning I went to the house at 10:00 and found that the front door to the house had been smashed and I could hear people inside. I went back to my house to get my dog and returned. There were several men and women inside the property.
Again as happened on Sunday, a shouting match ensued. One of the woman lifted a pail which they had been using as a toilet and threw it over me. I turned to leave and another woman came after me with a large piece of wood with a nail at the end of it.
"I knew she had every intention of assaulting me with it. I took my firearm and pointed it at her. She threw the wood at me and ran back into the house," says Mackay in her affidavit to the police.
About 10 minutes after this incident, they all left the house, but threw glass bottles and bricks over her fence all the while laughing, shouting and swearing.
'They said they would be back later that night and kill me'
However, on Wednesday, when she found two men and a woman at the house sleeping on the terrace outside the front door, MacKay went to the police station in Main Road and laid a charge of assault. It was apparently explained to her at the police station that there is a shortage of manpower to regularly patrol this house.
Is she not afraid? "If I don't do something it will just get worse again and I am determined this is not going to happen. I will go to see what is happening twice a day at least, since it is for the good of this neighbourhood. We have neighbours who are in their 70s and 80s who are scared. This is no way to live," she said.
Undeterred, Mackay has so far collected seven trolleys and phoned the respective grocery stores to fetch them.
"I will stop them and I am as determined as can be," says the diminutive woman.
Police say patrols will be increased
Police comment from Sergeant Chris Spies, corporate communication for SAPS, said: "A comment from a case of common assault was opened by a 59-year-old woman. Investigation into this matter has not been finalised and no arrests were made.
"It is important to note that a formal investigation is currently under way and we cannot comment on some aspects raised by the person during her interview. Some information that is already in the public domain may also hamper this investigation.
"Patrols have been increased at the two premises in question and it will continue. Members of the public are advised to contact the police regarding any safety issues and not to put their lives in danger by approaching suspects.
A number of safety structures are already in operation in Knysna under the auspices of the Knysna Community Police Forum, and the community are encouraged to join these structures."

The verandah where the vagrants sleep at night now since they can't get into the actual house.
Click here for previous articles: