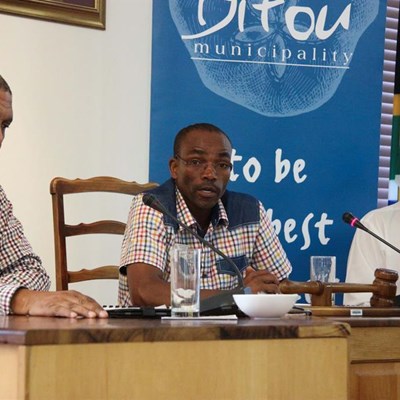 Municipal manager from left, Allen Paulse, Bitou mayor Memory Booysen and chief financial officer Felix Lotter when they announced that several municipal employees were being investigated over alleged electricity theft. Photos: Ewald Stander
PLETTENBERG BAY NEWS FLASH - Bitou Municipality is cleaning house with two more dismissals following alleged illegal activities by municipal employees.
Last week the municipality confirmed that four municipal officials had been dismissed after thorough disciplinary action over claims of electricity theft.
Just days later, a further two municipal officials were dismissed over alleged housing fraud.
Bitou Municipal manager Allen Paulse confirmed the dismissals and said that it followed a lengthy disciplinary process stemming from claims that employees illegally sold government houses to Kwanokuthula residents.
Approved government housing beneficiaries, who had been waiting since 2007 for their homes, claimed that the two municipal officials sold houses earmarked for them to residents not on the official housing list.
They also claimed that houses had been sold for varying amounts and that legitimate beneficiaries had also started paying to get the keys to their homes as they feared they would lose their homes.
Paulse added that the municipality had reported the matter to police. Police spokesman Captain Bernadine Steyn said that the investigation was ongoing. “No arrests have been made yet,” Steyn said.
Paulse said last week that four other employees had been dismissed in recent weeks and the disciplinary action against a further 23 had been concluded after more than 40 municipal officials had allegedly been linked to large-scale electricity theft.
The municipality was trying to get to the bottom of R9-million in electricity losses highlighted in Auditor-General Kimi Makwetu’s report released last year, when they made the discovery. After launching an investigation into the matter it was found that more than 40 employees had not purchased electricity for extended periods and during a sting operation in January they found that most of the homes identified had electricity metres which had been tampered with.
Read a previous article: 4 fired for electricity theft
'We bring you the latest Plettenberg Bay, Garden Route news'