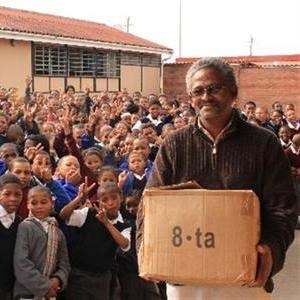 Deputy principal of Rheenendal Primary school, Jacobus America, carrying some of the toys.
KNYSNA NEWS - Toys for Africa, which distributes toys to less privileged children, visited Knysna and Plettenberg Bay on Tuesday, May 22 and Wednesday, May 23.

On Tuesday the charity drive's representatives visited Rondevlei Primary School with Sandra van Rensburg of Tiger Wheel & Tyre (George) who sponsored a toy for each child in the school and a few soccer balls for everyone to enjoy.

Toys for Africa founder, Danie van Loggerenberg delivered a strong message of believing in one's dreams, before Marcel Caroto stole the show with a song, Under the Moon, written for the children of South Africa. The visitors were impressed by the school's principal, Johanna Saayman commitment to the children, even taking children under her wing and into her home when their own support systems fail them.

On Wednesday, May 23 Toys for Africa made six stops. The first visit was to Karatara Primary School where they were treated to song and dance by the learners, before the visitors continued their charity drive at Rheenendal Primary School.

At Sinethemba Youth Development Centre, Knysna FM presenter Pieter Cloet, who the sponsored the toys, accompanied the party. At House of Hope in Kranshoek, Toys for Africa helped with handing out food to 360 children. Their next stop was at Sterreweg Primary School where the children of Sabrina Love Foundation also received their toys, sponsored by local business Lombkor. On their final stop at Masizame Children's Shelter, the Plett 255 Round Table joined for the handout of the toys it sponsored for all the children.

Read more about: Toys for Africa spreads joy and smiles