Starting from scratch with only memories 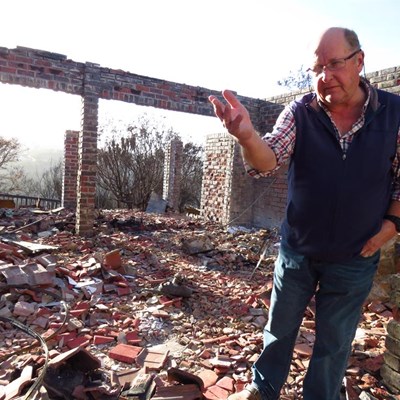 Heinz Kramer tells his tale of memories lost in the ruins of his home. Photo: Stefan Goosen
KNYSNA NEWS & VIDEO - How do you quantify the loss of a memory or memories? How do you start again when there is nothing left but ash and rubble? What is left for those who follow when everything is taken away?
These are only some of the questions that plague Heinz Kramer after the fires that rampaged through Knysna almost a month ago destroyed his home of 15 years in Templeman Drive, Knysna Heights.
“When I was younger my parents asked me what I wanted to inherit one day. I chose two sentimental objects that until recently still stood in my home. One was a cuckoo clock my father brought back from one of his missionary visits to Germany, for which he had an entire elaborate ritual when we left the mission station on holiday.
“After we packed all our suitcases and all got into the car as we left, his last action would be to stop the cuckoo’s pendulum. Once we got back, everything would be carried into the house again, he would tip the pendulum and fix the time. It was very special to him.
“The other item I chose was a crucifix of my mother’s, which was made in Oberammergau,” Kramer explained.
It was this memory that one day prompted Kramer to ask his son, Mark and daughter, Tanja what they would like to inherit from him one day. Instead of choosing the obvious items Kramer thought his children would take like original paintings, trousseau cutlery or family jewellery, they chose some quite surprising items.

“My son said he wanted my hunting knives which surprised me as it wasn’t such a huge collection. My daughter wanted my collection of walking sticks. Over the years and during my travels I had acquired quite a few unique ones. Tanja said that is how she would remember me,” Kramer said.
“But now everything is gone. My daughter said to me: ‘You know dad, if you guys pass away now there is absolutely nothing to inherit’. I had something from my parents I could cherish, but what do my children have now? The fire has taken it all,” Kramer added, visibly saddened and somewhat perplexed.
“When people drive past these burnt out houses they don’t see that lost sentiment. They don’t see people who have lost everything scratching around the rubble of what used to be a home searching for an heirloom that might have escaped the destruction. Yes, they see the material devastation and destruction. They experience shock and disbelief, but they don’t see the bigger picture,” Kramer continued.
When asked what he will do now, Kramer plainly said: “What can we do? All we can do is start from scratch.”
When Kramer returned to where his home once stood after the fires had destroyed it, a few strands of memories were found underneath all the rubble.

“I did find a tiny ceramic vase which was dear to my wife, along with a pottery warthog, guinea fowl and an owl. I took them to her while she was at work one day, and placed a little flower in the vase. When she saw it a tear shot into her eye.”
Watch a video below.
Click here to view a photo gallery.
ARTICLE:  STEFAN GOOSEN, KNYSNA-PLETT HERALD JOURNALIST
VIDEO & PHOTOS: MARK TAYLOR
'We bring you the latest Knynsa, Plettenberg Bay, Garden Route news'