Small man with a big heart 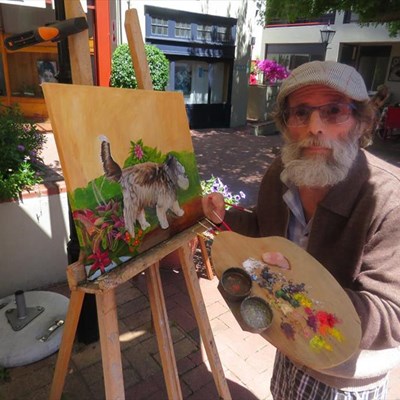 KNYSNA NEWS - Bryan Keenan, the small man who is usually stationed at Woodmill Lane at his canvas with brush in hand, barely needs introduction.

Most of Bryan's paintings feature his dog Jock, his work often juxtaposing the fun nature of the artist against the pain he feels since Jock’s passing.

His faithful companion died in 2014 and the artist has kept him alive in all his paintings ever since.

Bryan, who has been painting for the last 10 years, explains, “I used to work for a factory in Alice Dale and one day, when I was lowering the netting machine, the clutch and the chain block slipped and just like that I lost four of my fingers.

"I remember that day so vividly. It is after I healed that I knew I wanted to – I needed to – paint and I chose to not let that be my story.”

He said shortly after that life-changing incident he moved to Knysna with Jock.

“Jock was always with me. He had an amazing positive spirit, throughout life’s hurdles he always kept his tail wiggling, so the least I can do is honour a friend who has been there for me through all my works,” said Keenan. At his usual spot is Keenan, who invites locals to see some of his works.

The 65-year-old is selling his works in the form of paintings and postcards, and invites locals to "come celebrate Jock with me".

Mark Taylor of Knysna Cafe is helping Keenan by publishing and showcasing Keenan's works, postcards, cards and prints of his work.