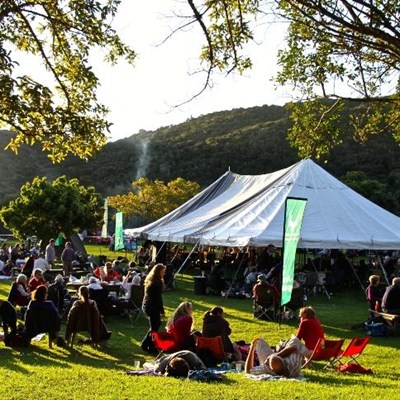 Visitors to Ebb and Flow Restcamp in Wilderness enjoy live entertainment during SA National Parks Week.
KNYSNA NEWS - A total of 4 383 South Africans visited the Garden Route National Park (GRNP) during South African National Parks Week, from September 14 to 19.
SA National Parks Week is a campaign sponsored by FNB and Total SA.
Nandi Mgwadlamba, communication manager for SANParks, said, that 1 619 people visited Knysna (where the Featherbed Company ferried approximately 350 on the Knysna Estuary, which falls in the GRNP), 1 567 visited the Wilderness section and 1 197 the Tsitsikamma part of the park.
Acting general manager for the GRNP, Johan de Klerk, said, "This is an increase from last year by at least 346 visitors. It is encouraging to see so many local visitors responded to our call." The SA Week campaign in the Garden Route kicked off on September 14 at an information session organised for locals in Harkerville, Knysna.
In Tsitsikamma, Segway tours were provided to local community members who would otherwise not be able to afford the experience. Learners from Coldstream, Woodlands and Storms River primary schools were taken on a guided Cultural Heritage Walk down the old Storms River Pass.
"In Wilderness, an orchestra in the park and a potjiekos competition drew the attention of most visitors. In all three parks, daily hikes and educational talks were scheduled. Domestic tourists contributed a total of R24.3-billion to the South African economy in 2013. In addition, the direct tourism contribution to GDP was R93-billion or 3% according to 2012 statistics."
According to De Klerk, the GRNP is encouraged by recent figures and also global eco-tourism trends that are on an upward trajectory.
"To keep the momentum, the GRNP is planning an open day for cyclists (in November in Knysna), a self-drive route in the forest areas (Knysna), a fun day (Tsitsikamma), and carols by candlelight in the forest (Wilderness)."
For more on the Garden Route National Park, visit their website or follow them on Facebook, and Twitter.
Tourists at the SANParks offices on Thesen Island during SANParks Week.
'We bring you the latest Knysna, Garden Route news'