Mike Hampton's truth on a shoestring 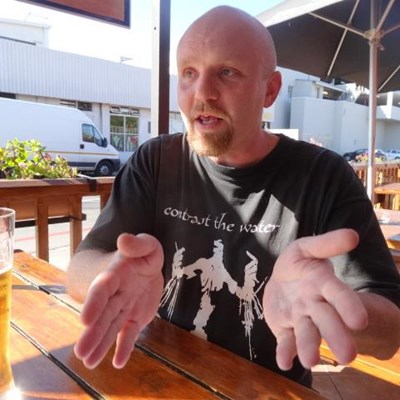 He chose to meet at Olde’s, a well-known local pub and restaurant, on Sunday, August 3. When finances permit, he observes and blogs from central places such as his favourite table at Olde's - a space in the corner with a view of the streets. There friend or foe can find him when he is not at a Council meeting or “searching for the truth”.

On Sunday, August 3 at lunchtime Hampton had just returned from one of his Love Knysna projects, one aimed at helping kids to learn the game of chess.

In this month, five years ago he first arrived in Knysna. He came for a three-day visit to re-assess his life and never left. His blogging word count is more than 1-million, most of those words about Knysna, which he describes as “the prettiest town in the world”. His "Wicked Mike persona” has become established as a Knysna personality and his websites appear when searching the internet for Knysna as a travel destination, but the information contained often contrasts with the good news about the oyster festival, craft shops, flea-markets, cosy cafés and luxurious accommodation.

Words such as 'accountability', 'transparency', 'truth' and justice jump out from almost every blog he writes. “Knysna isn’t home if we lose her to people who make decisions for themselves and not us,” he wrote when he introduced his Knysna Keep website three years ago.

Mixed response
The Knysna Municipality ignores him. They do not publicly engage on his websites or social media where issues and questions are being raised by both him and his readers.

Asking around town, it is clear that he has many followers and many critics. Some say he is an asset to the town. One prominent business owner said, “I believe every word he writes.” When asked why he had not subscribed as a follower of Knysna Keep, he answered, “I can’t attach my name or my business name to him. It can impact on opportunities and influence any possible sponsorship for events. I’m even afraid to comment publicly. When I see him in the street I thank him.”

Others say he is “bitter and twisted”, “has a personal agenda” or is “a desperate opportunist who can’t find himself a real job”.
He’s been widely criticised for his attacks on the town’s administration and its impact on the town’s economy. He is currently preparing his defence against harassment and crimen injuria cases that had been laid against him by Knysna Tourism’s CEO Greg Vogt. DA Constituency member Magda Moos has done the same. This is, however, not the first time he is in trouble.

These charges against Hampton have an effect on his life. “It keeps me away from doing the important work that needs to be done ... but I’ve been waiting to go on record so see these as an opportunity,” he said.

His political site, www.KnysnaKeep.org, had 29 000 views during July. He reached 15 000 people on his Facebook page last week with 1 900 people sharing, commenting or liking his posts.

“People who like me either share my criticism of our local government or they only see the pretty things on my positive sites. My enemies focus on controversy as if any other project doesn't exist. Do I want to harm Knysna? Nonsense, I love this town. The Google positioning of an article is also determined by what readers find the most interesting. What the critics should take note of is the public sharing of many of my opinions.”

Hampton said he wanted to be understood. “Even if it's sometimes laughable, my greatest frustration is unsubstantiated rumour and gossip. My critics tend to be friends or associates of people I have criticised or people unaccepting of change.”

Hampton claimed that his loudest critics almost never justify their criticism. “The easiest way to understand me is to ask me your questions.”

Life and human nature
When he had a bad day (quite often, recently), he preferred to help people. “It brings balance to my life and it is the only way to feel better.” He said he wanted to be understood personally but more important to him were the issues he was determined to address.
An unhappy childhood, discomfort in an all-boys school where corporal punishment and bullying had been a part of life, and lack of financial support to achieve his childhood dream of a career in journalism, did not deter him from becoming a writer. He said he had always had many questions.

“I need to understand the consequences of human nature. I want to be able to question myself and say, overall, I’ve done right by others in the naive hope they will do the same back to me.”

He regarded it his role to bring transparency back to Knysna. More so, he said, he was trying to educate people to think for themselves. “Stop complaining as if you can’t change anything. You own Knysna - local government works for you. Knysna Tourism is paid by you. The fact of the matter is I have many questions that matter and they never get answered!”

He described himself as a storyteller and a wordsmith. “I describe things the way they are, but I’m always a razor blade's edge away from my own emotion. I pretend to be tough to become tough. I’m dedicated to creating positive habits that will make me become the person I want to be.”

Yes, he said, he did get depressed at times. “Positive people tend to ignore the challenge of reality. If you do that, you can’t change anything. When you accept the dark side of life you realise that it's only a part of it. You gain understanding and a greater appreciation for the good things.”

He was not interested in definitions that prevent people from experiencing life together. “I am more interested in positive actions and love pro-active people.”

He said he was always faced with the decision to quit or carry on. “Three years without pay have been tough. What I do should have value and I must be able to earn support."

Dream on a budget
"My dream is to see a team of people dedicated to correct wrongs, educating people about the mechanisms that control their lives, and help children to grow up with a more positive attitude towards their own lives in Knysna.”

Recently he again asked publicly for financial support. “Asking for donations damages pride. Asking for help can become a habit, the more you ask the easier it gets – that's dangerous. Having no financial support is my definition of being independent. But the fact is that I'm cut off from business whilst I deal with these controversial topics. That's why I've started asking those who value what I do, to support me.”

Hampton wanted Knysna Tourism to receive triple the budget they have. “It is the most important organisation in town but it requires having leadership of the utmost character where checks and balances are in place. We need moral politicians and government officials who will renew the public’s trust.”

He asksed: “How can the people of Knysna allow the same people who were responsible for Knysna Tourism going bankrupt to not only retain their position and influence but, recently, have their powers extended?”

'Wicked Mike' recently became Mike Hampton on his website, He explained, “It served its purpose online. That was originally my music and poetry persona where I've still retained it. The name stuck as I topped the search engine rankings. It made sense to retain my online success, using it to pursue the far more serious matters affecting our lives. I'm not attached to a name. I'm just me.”