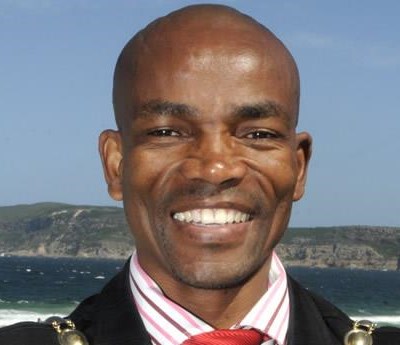 Bitou mayor Memory Booysen
PLETTENBERG BAY NEWS - Bitou mayor Memory Booysen has joined an exclusive group, which includes some of the world’s most influential people from royalty to world leaders, with his recent induction as an honorary Rotary member.
He received this honour on February 12 at the Plettenberg Bay Country Club where the local Rotary chapter held its annual bonanza draw.
Booysen now joins the ranks of other honorary Rotarians including Nelson Mandela, Pope Francis, first man on the moon Neil Armstrong, former British prime minister Sir Winston Churchill, the 34th American president Dwight D Eisenhower, his predecessor John F Kennedy, British royals Princes Philip and Charles, Prince Rainier III of Monaco, Hollywood business mogul Walt Disney, Microsoft co-founder Bill Gates and chancellor Angela Merkel of Germany.
During the induction speech incoming chairperson of the Plettenberg Bay Rotary Club Patrick Leary praised Booysen for his role in changing Bitou for the better.
“Booysen assumed office at a time when the affairs of the municipality were, to put it mildly, not in great shape. Our municipality was deeply in debt, overstaffed and poorly managed,” Leary said.
He added that change was not always welcome and that in the beginning Booysen suffered hardships. “Booysen’s life and his family were threatened and he seldom spent one night in the same place.”
Leary said today the situation was different. “Recognising the need for specialist input, Booysen set about creating departments with objectives and appropriate staffing. This required diligence, fortitude and perseverance.”
He added that this paid off and Plett’s clean audits over the past two years were an indication of the progress that had been achieved.
As honorary member Booysen has access to all Rotary Clubs across the globe, and enjoys all rights and privileges accorded to members, except the right to stand for elections or to vote in an election or to vote on any business or policy decision related to Rotary business.
Booysen said he was humbled by the recognition he, his council and administration received.
ARTICLE: YOLANDE STANDER, KNYSNA-PLETT HERALD CORRESPONDENT
'We bring you the latest Plettenberg Bay, Garden Route new's