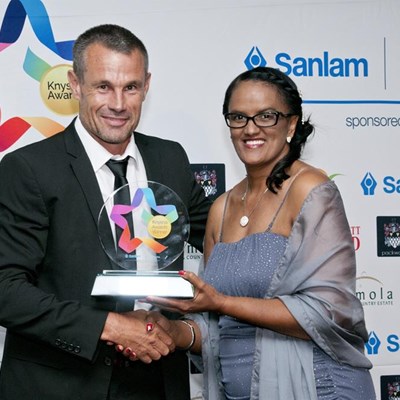 The Proudly Knysna Award went to Magnetic South. Here Mark Collins, owner of Magnetic South, receives his prize from Knysna executive mayor Georlene Wolmarans.
KNYSNA NEWS - The winners of the third annual Knysna Sanlam Awards were announced at a gala event at the Simola Golf and Country Estate on Thursday, February 4, with much excitement.
The Knysna-Plett Herald was the media sponsor for these prestigious awards.
The highlight of the evening was a surprise Lifetime Achievement Award given to the late Dalene Matthee, a South African author who became famous for her novels featuring forests in and around Knysna. Matthee who was born in Riversdale on October 13, 1938 and died in Mossel Bay on February 20, 2005.
Hilary Matthee, one of the author's three daughters, said, "This was the first time my mother has been honoured or recognised in Knysna," as she tearfully accepted the award on her late mother's behalf. "She (Dalene) was in love with the forest."
To the nominees and winners Hilary said, "My mother always reminded us that nothing happens as an accident, all happens with a purpose." With these words she inspired everybody involved in the awards ceremony to never give up. To prove her mother's success after being at a crossroads in her own life, she told the guests that Dalene always wanted to write dialogues, but felt trapped writing short stories for magazines.
"My mother dreamed of writing dialogues and so she wrote "'n Huis vir Nadia" and "Petronella van Aarde, Burgemeester". She took it to the publisher in hope that it would become a television series, but she did not even give her an opportunity to get her foot in the door."
Hilary encouraged all those present to do what her mother would and that was "do not give up". "She [Dalene] took the two dialogues and eventually got them published as books. Then after a walk with her brother Hardy in the Knysna forest, she fell in love with the forest."
Dalene became the author of 13 books and is well known for her four "forest books" written about the Knysna forest. One the the most famous novels was "Kringe in die Bos" (Circles in the Forest).
Click here for a photo gallery of the event.
The Knysna-Plett Herald will be publishing an in interview with Hilary Matthee and with each winner in every category over the next 12 weeks, but here are the winners in the 12 categories:
Best Tourism Activity Award
The Jaguar Simola Hillclimb
Best Tourism Establishment Award
Lakeside Lodge & Spa
Best Eatery Award presented by Barnies Trading
Caffe Mario
Local Charity and NPO Award
e’Pap Childrens’ Feeding Project
Best Community Leader Award
Cheryl Britz
Social Media & Online Marketing Award presented by Sozo Digital
Penny Foyn (Knysna Golden Girls Community)
Young Entrepreneur Award
Duran de Villiers
Service Excellence Award
Allsound Security
Small Business Award
Nine on Grey
Sanlam Businesswoman of the Year Award
Ingrid Diesel
Sanlam Businessman of the Year Award
Michael Wilbraham.
Proudly Knysna Award
Magnetic South