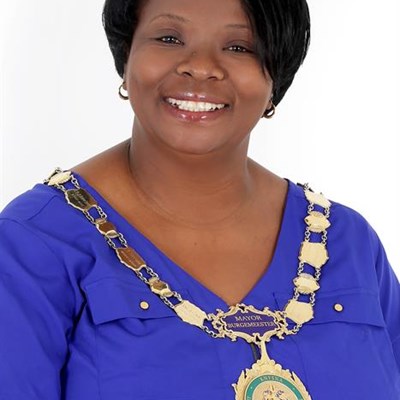 Knysna mayor Eleanore Bouw-Spies. Photos: Supplied
KNYSNA NEWS - A story about two white families who were evicted from the place in Bokmakierie Street where they pitched their caravan and makeshift shelter in last week’s edition of the Knysna-Plett Herald was not reflective of the truth.
Reporter Nwabisa Pondoyi was told by one of the squatter family heads, Koos Labuschagne, that their structure was demolished, while Isak Holtzhausen was evicted after parking their caravan on open ground next to Yellowwood flats last week.
Both said they had no alternative, but to squat.
"Whites do not qualify for housing" claim untrue
Holtzhausen said he had been to the municipality's offices seeking assistance and was referred to the housing department where "a young black woman" assisted him.
His allegations that this woman [municipal employer] said to him that he did not qualify for an RDP home because he "was white, and earned too much" have since been fiercely challenged by the municipality.
Municipality spokesperson Fran Kirsten said, "The municipality was never asked to comment on this serious allegation, which is not only against the press code, but also inflammatory and of great concern to the mayor's office."
The municipality denies that anybody in the housing department said this to Holtzhausen.
Former mayor not guilty of allegations
Holtzhausen then told Pondoyi that he spoke to former mayor Georlene Wolmarans who, according to him, referred him to "a man two doors down from the mayor's office to put his name down for a serviced plot where water, sewerage and electricity would be available". According to Holtzhausen, a "white man" told him such a list does not exist and that the "former mayor doesn't know what she is talking about".
Although Wolmarans acknowledges her meeting with the gentleman, she vehemently denies ever referring to a "serviced plot where water, sewerage and electricity would be available".
Claims of mayor not being available for months untrue
Most serious of all were the claims by Holtzhausen that the office of mayor Eleanore Bouw-Spies said she would only be available in three months’ time.
The mayoral office manager Christopher Bezuidenhout did answer this query in a telephonic conversation with Pondoyi and told her that owing to the mayor's busy schedule, appointments sometimes have to be made three weeks in advance.
This critical comment was not included in the story.
Mayor passionate about communication
Herein lies the greatest damage done to the municipality because mayor Bouw-Spies is known to be passionate about communicating with the community, has even set up a Facebook page so that people can interact with her about anything, and has gone out of her way to make this clear.
As a result of this story her Facebook page has been inundated with unwarranted criticism of her.
Racism on social media a result
Owing to the nature of this story where white squatters were evicted, and unfounded claims that the municipal staff members referred to race as reasons for RDP housing being declined, it has also sparked racism on social media.
Black squatters are frequently evicted when they illegally build structures in places where this is not permitted.
The mayor feels that she has now become the target of "reverse racism" since the "white squatter" story emphasised this, which is by no means the truth.
Apology to mayor and municipal staff
The Knysna-Plett Herald reporter Nwabisa Pondoyi and editor Elaine King apologise unreservedly to the mayor and municipal staff who were implicated in allegations that were not true – and for us not validating them.
Read the article in question, here.
'We bring you the latest Knysna, Garden Route news'