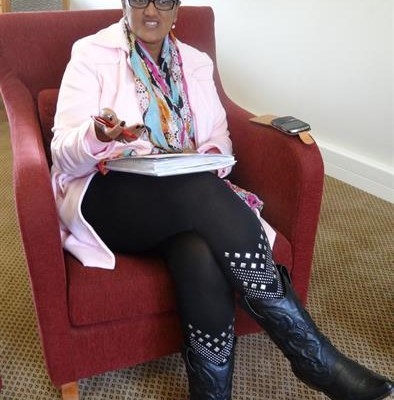 It compares slightly unglamorously to the one of her colleague, the municipal manager Lauren Waring. They simultaneously moved in their ‘new’ offices early this year. The municipal manager and her team moved in to the stylishly re-furbished and renovated wing and the mayor moved across the hall, with her old furniture that “will get a facelift soon”.

Of the new “fancy” offices of her colleagues she says that people tend to forget that part of the building was used as a clinic. “We had to upgrade it. My office will also look better when I’m done. In the end I’m just grateful for more space,” she says.

In a frank conversation with the Knysna-Plett Herald, she talks about her love for the Knysna community, the lack of privacy that goes hand in hand with her choosing the role of being "a mayor of and for the people". She tells us why she was chosen by the DA in the first place and why she wants to be mayor again in 2016. She discusses her relationship with the administration and speaks from the heart when it comes to her family.

An initial meeting on August 11 was interrupted by "crucial municipal business" and a trip to Cape Town on behalf of the municipality, "cleverly orchestrated not to cost the ratepayers a cent". This prevented her from answering the ‘serious’ questions. While Wolmarans endeavoured to answer these via email and telephone, these technologies consequently 'failed'. Following the initial meeting, she realised that she would need the support from her administrative staff to adequately respond to questions, and the interview was reschedule to Monday, August 18. This time she brought in "my people", deputy mayor and chairperson of the finance committee, Esme Edge, as well as a consultant with strong ties to the DA. Once she was convinced of the Knysna-Plett Herald's intention to get to know her better, she referred certain issues to her team, but also made time for a brief heart-to-heart conversation.

Known to be feisty and direct, Wolmarans immediately starts talking about Mike Hampton (aka 'Wicked Mike'). "The media can make or break you," she says. “All I expect, is both sides. Balance. Give the public a complete picture,” she pleads. "I can’t deal with his negativity. I think he lacks insight and understanding. I see him in our meetings, but when I read his interpretation …"

Wolmarans' call to investigate the ISDF tender process was commended as a step in the right direction in terms of good and transparent governance. She says the ISDF tender process has been a "sizzling" topic for too long. She took the "brave" step to get Provincial Treasury on board to probe this process. (The ISDF is a strategic plan that will be developed to determine, amongst other priority decisions, where development can take place in Knysna in the next 30 years.)

While her decision was praised, it also evoked criticism from people who claimed that she only requested the investigation in an attempt to justify the municipality’s actions. "Where there is smoke, there is most likely a fire," says the Mayor. "This issue has been worrying me for too long and I need to make sure."

Wolmarans says she was most qualified for the position of executive mayor. “I had the qualifications and the expertise. It was a thorough process and I stood against competent people. My vision was to be that bridge between local government and the people."
Asked whether she regarded herself as successful, she says: “I am from and for this community. I defied the unnecessary prestige and I am available.” Wolmarans keeps her own diary. She does her own shopping. “I walk amongst the people. It’s only when I watch rugby that I make sure I’m in my own little safe circle,” she laughs. She says rugby is her 'thing'. “The Springboks and the Stormers, those are my teams. When the men are on the field, that is when I let my hair down."

She says friends are hard to come by. “Being in this position one must always ask 'why?'. Why is this person interested in me?" She says friendship is something different, “but anyone can SMS me. People sometimes misunderstand an open-door policy. That simply means I’m interested in your issues and I will deal with them timeously and with determination. Send me your queries or complaints. I’ll make sure it is dealt with. If it is addressed to me, I’m responsible and I’m available.”

Asked about the farming communities who constantly blame her for her alleged lack of interest, she is adamant. “I care! I care a lot. The fact is we need PG Bison to come to the table and they don’t.”

For the love of family
Born and bred in Riversdal, Wolmarans sees herself as a small-town girl. She has been married for 19 years to Daniel, who works for correctional services, and they are raising three girls (ages 23, 16 and 15). Her daughters are "my life", she says. “Don’t ask me to cook or do housework, but my family life is sacred." The mayor has her mom to look after the household. “My mom is my everything.”
She then immediately lashes out at someone who recently used Facebook to accuse her and her daughters of misbehaving at a school rugby match in Hornlee. “I will fight for what is right. No-one touches my children. We were not even in town during this incident. She will hear from my lawyer.” She says she teaches her daughters to express their feelings. “They must be able to talk. I want to know. There is nothing worse than having to say, 'I did not know'."

Wolmarans says she is a devout Roman Catholic and makes time, especially in the mornings, to worship. “My belief is core to my life and I visit the town parish with my daughters. My husband visits the one in Hornlee.”

She says she and her family break away in their caravan whenever they get the opportunity. “Still Bay is our spot. If only … if only I could switch off the cellphone. I’m addicted,” she laughs. She says she does not enjoy going out to restaurants. “This is a busy life. When we relax, we braai.”

Tourism, the administration and her future
Of Knysna Tourism and the controversial appointment of Greg Vogt as CEO, she says she does not know him very well. “All I know is that by the end of November they must have a strategy in place to ensure synergy between economic development and tourism. Tourism must complement development and Knysna must be promoted as a town to live, work and play in. The CEO’s intentions seem to be above board,” she says.

Asked about her relationship with Knysna Municipality's administrators, who are situated one floor from the mayor, she says, "It’s all about getting the job done.”

“I want this town to work for all of us. Everything we do must be to everyone’s benefit. I want to work hard. I want to give people the benefit of the doubt and, yes, I want to be mayor again in 2016.”