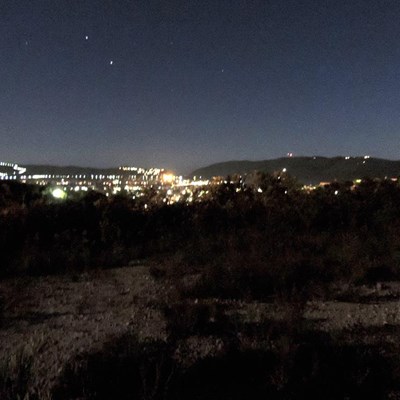 The amazing view from the Pledge Nature Reserve if you partake in the Night Walk.
PLETTENBERG BAY NEWS - Darkness was approaching as we met at the upper parking of Pledge Nature Reserve. The glow of the rising moon behind the ridge added an almost mysterious feeling to the excitement of going into the forest at night.
We were about to go on the Pledge Nature Reserve Full Moon Walk.
We were met by Mervyn Crous, the manager and very knowledgeable host of the evening, together with Stan Davies, trustee and member of the management committee of the Pledge Nature Reserve Trust and his wife Jo.
The rest of us were interested visitors and residents of the area, including the ICU nurse who – as we found out later that night – had saved Mervyn's life after he had been stung by numerous bees years ago; an English couple who had retired in Knysna; the couple from Sedgefield who where interested to find out if Pledge Nature Reserve could host similar concerts as what they were used to in the Helderberg Nature Reserve when they still resided in Somerset West; and the "newby" tour guide, eager to incorporate Pledge Nature Reserve into the itineraries for her guests; and me.
I was curious to find out what the Full Moon Walk was all about. It sounded interesting, and with Pledge Nature Reserve right on the Knysna Wayside Inn’s doorstep, a lovely opportunity for our guests to explore the mini version of the Knysna forest while staying with us. I was not disappointed.
Mervyn pointed out the different types of trees, including our national tree, the real yellowwood, as well as its local "brother" the Outeniqua yellowwood. But also the stinkwood with their knobbly leaves formed by parasites happily coexisting in the tree's leaves, and not harming the tree at all, it seems. The cycads, the "Mickey Mouse tree", and the money tree. He took us past the pond, filled with white (nonindigenous) and purple (indigenous) water lilies, at times almost overgrown by the invasive but ever so beautiful imported Mexican water lily.
He led us past the numerous wooden benches hidden in the thick bush. Along the (currently dry) river through Clivia Lane, and past the Circles in the Forest display. In "Circles in the Forest", one of the most well-known books about the area, local author Dalene Matthee mentions close to 160 different species of trees and plants in the Knysna forest.
With close to 300 different species appearing in Pledge Nature Reserve alone, and 80 species of birds, it only seems appropriate to commemorate Matthee and her books here.
We climbed our way to the higher end of the reserve, following the different trails, all clearly marked with handcrafted wooden signboards and colourful "footsteps" pointing us in the right direction. From the thick bush, old trees and plentiful ferns we moved into lower shrubs, and then the fynbos, Proteas and Ericas galore, some still flowering, some already past their most "uitbundige" stage.
And was it because it was dark by now? An overwhelming, almost warm smell of fynbos was in the air typical to the Southern Cape, typical to our coastline, typical to Pledge Nature Reserve.
And then we saw the moon! And the stars! And all the little lights of Knysna below us!
We had reached the top of the reserve, the viewpoint, with its recently extended picnic facilities. The snacks came out the bags, the wine started flowing and the stories started coming - about the African adventures we had all been on, about the wonders but also risks of being exposed to Mother Nature (including Mervyn’s story of the attacking bees) and about what we could all do to save this from extinction.
We decided saving Pledge Nature Reserve was a good start!
It felt like we had known each other for much longer than the few hours we had been together, and it was well after 22:00 before the red cat which had followed us all the way up, showed us the way down again.
* See our What's On section for details of the next Moonlight Night Walk on March 23 at Pledge Nature Reserve.
Article by Ypie Kingma.
'We bring you the latest Plettenberg Bay, Garden Route news'