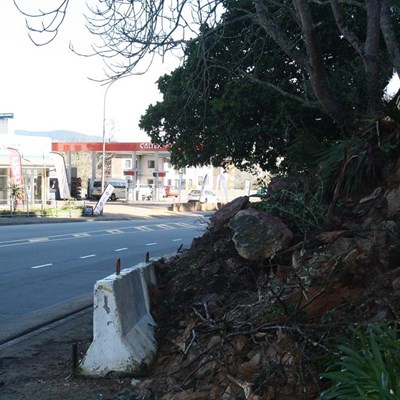 Nearly a year later and the Western Cape provincial government have not yet repaired the slope that collapsed at the end of June last year due to persistent heavy rain and strong wind. Photo: Christo Vermaak
KNYSNA NEWS - Nearly a year after the partial collapse of a slope along the N2 (Knysna Main Street section), on the western side of the provincial hospital, the Western Cape provincial government (WCPG) has not started with repair work.
The slope first collapsed at the end of June last year due to persistent heavy rain and strong wind. The situation worsened in the middle of September when the slope shifted further. At the time, municipal manager Grant Easton said, "A contractor had been appointed to make the area safe, and a geotechnical engineer had been appointed to investigate potential recourse."
In a report to the Knysna municipal council the cost of the repair work is estimated at about R5-million. Easton explained that the provincial department of transport and public works (DTPW) is responsible for repairs to the N2, "however we will contribute 20% (approximately R1-million) to the costs".
Last week, on May 19, Easton again emphasised that the provincial government is responsible for the repair work. No time frame on when the work will start could be given.
In November Easton said, "The DTPW have indicated that they are considering three options to repair the slope and that they are in the process of procuring a surveyor to survey the site. They have also indicated that they estimate works to commence in the new year."
The department's "three options" are not known, while the slope has still not been repaired. The Knysna municipality in the meantime manage to keep both lanes in the direction of Plettenberg Bay open for traffic.
Byron la Hoe, DTPW communications officer, on Tuesday said, "Tenders for this work closed on April 12. Due to the technical nature of the work involved, it was first necessary to perform a technical assessment of the submitted offers, and the process is now complete. It is anticipated that a contractor will be appointed and commence with the construction sometime in August 2016."
Click here for previous articles:
ARTICLE & PHOTO: CHRISTO VERMAAK, KNYSNA-PLETT HERALD NEWS EDITOR
'We bring you the latest Knysna, Garden Route news'