Knysna men and women joined hordes of others in SA last week to say...

KNYSNA NEWS - Members of the Knysna community last week came together to pay their respects to and mourn abused and fallen women and children locally and nationally and to take a stance against the scourge of rape and brutality that has been dominating the news in recent months.

On Friday 6 September, Knysna Municipality organised a prayer session at Memorial Square, and during the opening remarks by mayor Mark Willemse, he implored the community to stand together and pleaded with men to take responsibility and to account for those around them.

"We can't be quiet when we see things happening in our communities, we need to be harsh against those committing the crimes. We need to stand together as one," Willemse said.

'We didn't act as a town'
The keynote address was by Speaker Titi Gombo, who said she feels ashamed to be a politician because she is one of those failing the country and the women in town. She also committed to look after the interests of women going forward.

Gombo added that it is okay for women to be angry but that they must not lose focus, before reminding them of the women of 1956 (who marched on the Union Buildings in Pretoria to protest pass laws). "They had one thing in mind and achieved it." She also expressed sadness that the town did not make a noise about former Knysna local Meghan Cremer's violent passing. "We didn't act as a town… we were silent."

Gender-based violence
Members of activist movement #TheTotalShut Down (#TTS) were also there and its spokesperson Candice Ludick said a few words before lighting a candle: "I'm disappointed that we're standing here today mourning the loss of so many women, not just Meghan, but any other woman who has died at the hands of the man who claims to love her, who died at the hands of a stranger for being a woman."

Ludick then referred to 24 demands that they as an organisation handed to the president a year ago, which she said, if met, would solve the "dangerous narrative in our society". "The demands have not been met and each day we see the loss of life. It is not good enough. We are faced with a national crisis, women are dying every day because they are women," said Ludick.

'End patriarchy'
She added that men also suffer, "from patriarchy". "It's time we end patriarchy and replace it with a system that serves our common humanity."

The municipality's director of corporate services Phumla Makoma then thanked all the attendees who took the time to join hands in ensuring that "we put an end to the demonic act of killing women". "If a person is claiming to love you, surely he cannot treat you in the manner in which the men are treating us now," she added before thanking the men who attended as well as the leadership of the municipality.

On the same day, #TTS organised a silent vigil outside Knysna Post Office in remembrance of Cape Town student Uyinene Mrwetyana who was brutally murdered around 24 August, allegedly by a postal worker at a Cape Town post office, as well as Plettenberg Bay's Sandisiwe Mona. Her remains were found about two weeks ago after she had been missing since April.

Some victims' names were written on the sidewalk. There were shifts as more and more locals participated in the vigil throughout the day. Willemse, Gombo, Kysna Independent Movement's Susan Campbell, magistrate Zukiswa Hans and learners from Oakhill College were among the attendees.

'Pressure on government'
Ludick said, "It was heartening to see the youth getting involved, boy children recognising that toxic masculinity is not okay and that rape culture can end with them… It's interesting to note that people are starting to recognise that demonstrations are an effective way of putting pressure on the government. We'd like to thank the Speaker and the mayor for joining and not bringing party politics to the table. We can respect them for that." 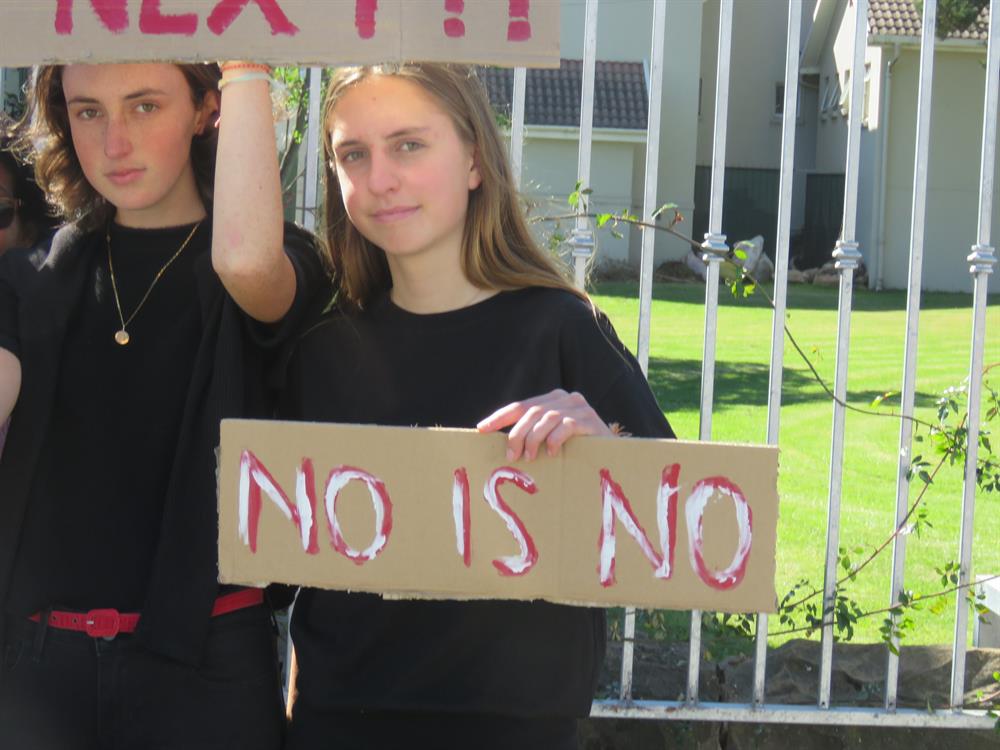