Another blow to promised bypass questions 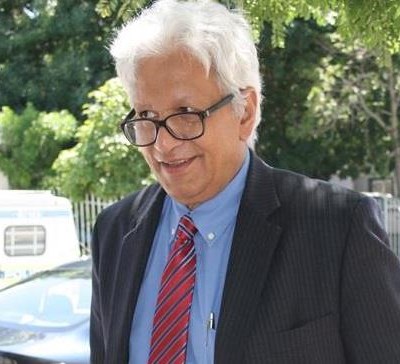 The chief executive of the SA National Road Agency, Nazir Alli, outside the Knysna council chambers on Monday, December 14 to attend a closed meeting. Photos: Christo Vermaak.
KNYSNA NEWS - More question marks are now hanging over the proposed Knysna bypass, already surrounded by controversy.
The arrival of Minister of Transport Dipuo Peters was awaited on Monday, December 14 at the council's chambers to once and for all provide clarity on the bypass issue, with the table set, quite literally and figuratively, to welcome Peters at 10:00.
"The minister cancelled her visit due to unforeseen reasons," declared SA National Road Agency (Sanral) head of communications Visi Mano"
This followed an announcement on Friday, December 11 that Peters would be in Knysna "with high on the agenda the bypass". Also on the agenda was the time set for the minister and interested people to visit areas that would be affected by the building of the bypass.
"After the media briefing there will also be a site visit to areas affected by the proposed bypass," Velile Waxa, a local community spokesperson said at the time on behalf of the minister.
Sanral chief executive Nazir Alli eventually took the hot seat, but behind closed doors with "ANC comrades". After the closed meeting, Mano was tasked by Alli to address the media and answer their questions. "We have no answers on the bypass. The minister will in the first quarter of next year personally come to Knysna to answer questions on the bypass," Alli said before leaving with his entourage.
A year ago already, in December 2014, the story behind the long-awaited N2 bypass became even more mysterious, when the former Knysna portfolio councillor for planning and development Louise Hart made the statement that the Knysna bypass will never be built.
According to Sanral's website www.nra.co.za, the draft environmental impact report for the N2 Knysna Toll Highway was made available for public and authority review on April 24, 2009. The review period closed on June 26, 2009.
"If given the go-ahead, the project will be carried out jointly with the Knysna municipality to provide a highway that could reduce the volume of light and heavy vehicles moving through the Main Street and causing congestion. The Knysna town council accepted the proposed national highway construction, which is to be paid for by the users of the road through, for example, tolls," it states on the website.
At the same time, Grant Easton, who was then acting municipal manager, said: "The municipality will not comment on this matter."
Some of the questions asked by the Knysna-Plett Herald were: "Why did the portfolio councillor for planning and development make this statement that the bypass will not become a reality? Who mandated her to make such a statement? Is this the position of the council, and if so, when was this decided? What is the current status of the proposed bypass and what are the municipality's plans forward? What is the originally planned position for the bypass (from where to where) and is there a budget in place for it?"
Hart also refrained from answering any questions on the bypass, although she phoned the Knysna-Plett Herald on December 9, 2014 and said; "I received the questions, but will have to go and search for the information." Easton's response came hours after Hart's promise of answers.
At a DA Ward 9 and 10 feedback meeting on Thursday, November 12 the new portfolio councillor for planning and development, Peter Myers, told the meeting that he was new in the portfolio and would have to study everything surrounding the bypass issue, before he could answer any questions on it.
Click here for previous articles:
'We bring you the latest Knysna, Garden Route news'