This is not only the highest zip line on the Garden Route, but also the longest multi-line zip line in the area.

A not-too-fazed Blake Linder on one of the rides.

PLETTENBERG BAY NEWS - Tarzan-like screams echoing in Kranshoek on the outskirts of Plettenberg Bay are likely to be a new feature among the bird calls and rumbling ocean in the area as thrill seekers now have the opportunity to zip above a 250m gorge in the Harkerville section of the Garden Route National Park.

And this is likely to be the only "noise" to come from this new SANParks project – a series of zip lines spanning 2,2km across the gorge – as the cables used are cutting-edge equipment that drastically reduces noise pollution that comes with traditional zip line technology.

The ride down each cable is almost soundless, meaning visitors can experience bird calls and the roar of the ocean on each line.

SANParks, in collaboration with adventure company SA Forest Adventures, launched what has been dubbed the Knysna Zip Lines on Monday.

The activity sees adrenaline junkies zip across four lines over the Kranshoek gorge, speeding 250m above an indigenous forest and along one of the most spectacular views of the Garden Route coast to one side.

This is not only the highest zip line on the Garden Route, but also the longest multi-line zip line in the area.

Photo gallery: Knysna Zip Lines - not for the faint hearted

The project itself, however, has been all but a "zippy" endeavour as it was lashed by delays ranging from the devastating fires in 2017 to the outbreak of the worldwide Covid-19 pandemic. Yolande Stander gets her turn of a birds' eye view over the landscape.

Park manager Megan Taplin explained that the project, driven by SANParks, went out on tender about four years ago and was awarded to SA Forest Adventures in 2017. Thereafter the fires swept through the area and brought the project to a halt until late 2018. And just weeks before its planned launch this year, the coronavirus hit.

"Tourism was one of the industries hardest hit and therefore such an activity brings a welcome boost. It also fits with SANParks' vision of linking sustainable national parks with society," Taplin said.

She added that the project is environmentally friendly and complements the area's existing hiking and mountain bike trails. It also shows off the rich fauna and flora of the indigenous forest in the gorge and rare and rich fynbos on the ridges. 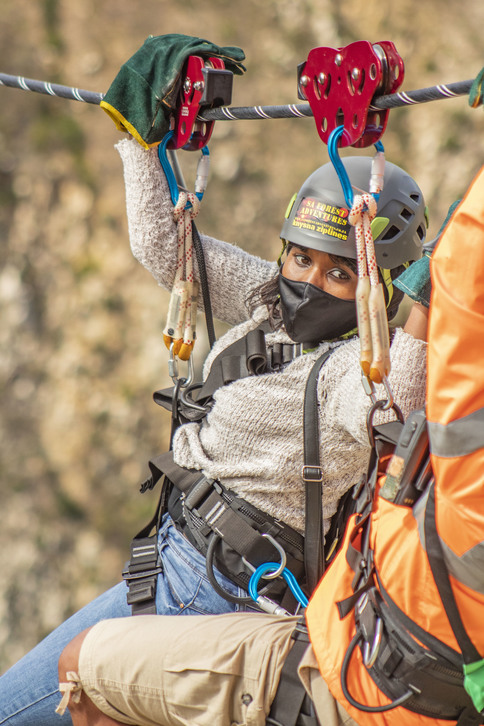 Vuyokazi Nkanjeni is brought back to the receiving platform after ending just short. Photo: Blake Linder

SA Forest Adventures managing director Clinton Lerm said not only does the zip line provide an experience of a lifetime for visitors who tackle the four lines, but it also provides a boost for the local economy. The guides will be from neighbouring Kranshoek, Knysna and Plettenberg Bay and will be trained by experienced and qualified adventure guides with many years of experience in safety protocols. Material and products used in the project, with the exception of specialised equipment, were also sourced locally.

Lerm said the cable they use is of a special plastic material which, although five times more expensive than the traditional cables used for zip lines, drastically reduces noise pollution.

More than R4.5-million has been invested in the project so far and there are plans to extend the zip line in the near future to span over 3.2km and include an additional two lines.