Moody’s is the only major company to rate SA’s debt at investment level after S&P Global Ratings and Fitch Ratings cut their assessments to junk in 2017. Photo: Scott Eells, Bloomberg

Overseas ownership of South African government debt fell to 37% of the total at the end of August, from as high as 43% in March 2018, according to National Treasury data.

That’s the lowest level since February 2017, suggesting some investors aren’t waiting for Moody’s to downgrade the country to junk — a move which would see it removed from Citigroup Inc’s World Government Bond Index, sparking forced sales by investors who track the gauge.

That’s despite the fact the South Africa’s yields are the highest in the WGBI, which requires an investment-grade rating from either Moody’s or S&P Ratings and is tracked by investors overseeing as much as $3 trillion.

Moody’s is the only major company to rate South Africa’s debt at investment level after S&P Global Ratings and Fitch Ratings cut their assessments to junk in 2017.

“Investors who would be forced sellers in a downgrade, some of them have sold,” said Edwin Gutierrez, London-based head of emerging-market sovereign debt at Aberdeen Asset Management. “Ramaphoria clearly has died,” he said, referring to a term coined to describe investor confidence after President Cyril Ramaphosa took office in February 2018. 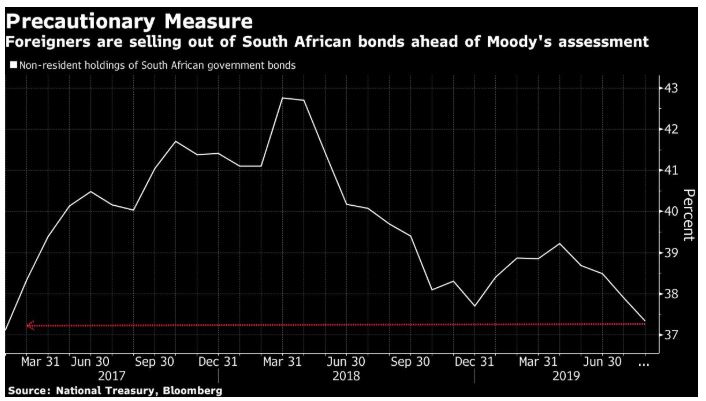 Still, the company could lose patience if the mid-term budget statement later this month doesn’t convince it the government has a handle on debt and the fiscal deficit.

“The upcoming Eskom unbundling white paper is the main yardstick to watch,” said Daniel Tenengauzer, the New-York based head of markets strategy at BNY Mellon, in a note to clients. Failure to produce a credible turn-around plan for Eskom would put the government on the hook for much of its R450 billion ($29 billion) of debt, putting pressure on the fiscal shortfall, estimated at 4.9% of gross domestic product in the February budget.

If the deficit widens to more than 5.5% of GDP, that would “likely change Moody’s optimistic take on fiscal accounts,” Tenengauzer said. A downgrade to junk would lead to bond outflows of at much as $15 billion, according to BNY Mellon.

The yield on South Africa’s benchmark bonds due December 2026 had risen six basis points by 1:24 pm in Johannesburg in the week to date, trading at 8.36%, the highest level since August 21. Foreign investors have sold a net R2.7 billion of South African bonds last month through September 27, according to JSE data, bringing outflows this year to R8.8 billion.