She is said to have made the decision in an effort to keep her trip ‘low key’.

ENTERTAINMENT RING - In an effort to reportedly keep her family’s highly publicized tour “low-key”, the Duchess of Sussex Meghan Markle is said to have removed her £140,000 (R2 million) engagement ring for the second day running.

After having been spotted without the three-carat rock on Monday, Daily Mail reports that the 38-year-old opted to only keep her gold wedding band on, pairing it with a turquoise Jennifer Meyer ring and a set of earrings from the same designer.

After noticing this, many Southern African’s took to Twitter to question the move.

The custom-made engagement ring was designed for her by Harry when he proposed, and she later redesigned it “to make it look more dainty.” 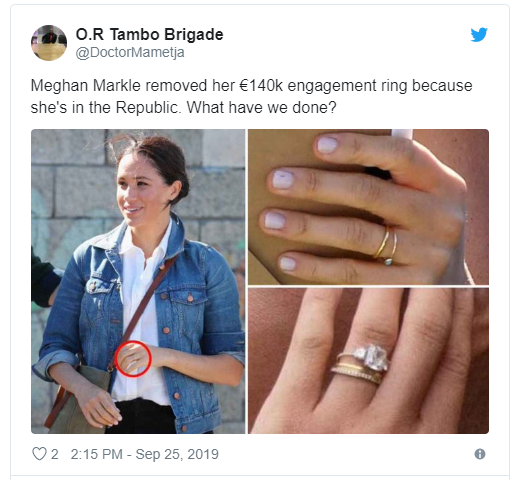