Are vertical stages 'appalling' or 'the future'?

The debate went up a notch this week when Mabel performed what's been dubbed the world's first "vertical gig" on a three-tiered stage.

ENTERTAINMENT NEWS - From the serial snapper who fills the camera roll on their phone (or their tablet, you know who you are) to the "watch the band, not your phone" traditionalists, there's a blurry spectrum of where fans and musicians stand on the best gig etiquette.

The debate went up a notch this week when Mabel performed what's been dubbed the world's first "vertical gig" on a three-tiered stage.

Its designers called it "a gift for a fans' Snap and Insta Stories" which "should stimulate some debate around live music staging conventions for a Generation Z audience".

"I'm definitely not a purist when it comes to the whole no phones at gigs rule," Charli XCX tells Newsbeat.

"It's always interesting to go to a gig where phones have been banned because it is a different experience and people are more engaged."

She thinks the idea of building a show around audiences with phones is "interesting".

"I don't think there's ever any right or wrong answers with anything artists do.

"As long as the idea is executed confidently, and actually looks kind of good, then anything goes." 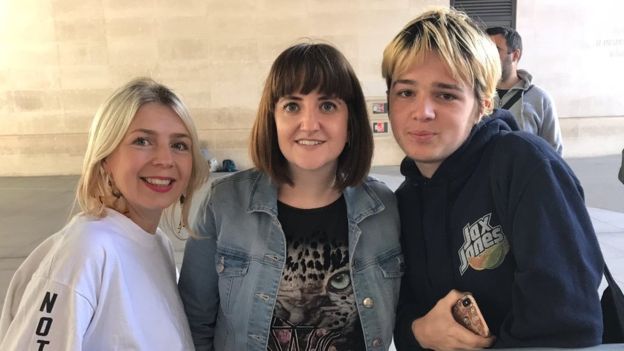 Diana, Chloe and Liam (l-r) have mixed feelings about the idea.

'Cool but not the future'
Diana, who was at the "vertical gig" said it "was a cool idea".

"I just hope that not all gigs are that way.

"They were so far away, you lose the interaction and the intimacy of being in the front row..

"I wouldn't like it to be the future. But it was fun as a one-off as a launch type of an event."

Her friend Liam, who likes to "always film everything" at gigs, says it's important to have good memories from shows.

"I think it's so cool, more artists should do it.

"Especially if they don't tour for like two years... it's good to have something to look back at.

"I do like being front row though and seeing artists up close... it's not great if you're not going to see anything."

Chloe says some of the best gigs she's been to are when she's kept her phone in her bag.

"With something like that stage it's probably better to be further back so there's no point queuing to get to the front so maybe that's a good thing."