The 60-minute film's success is a testament to the growing popularity of online streaming platforms because of the coronavirus pandemic.

"Alephia 2053" is an animated feature centred on the fall of a fictional autocratic regime in the Middle East in a generation from now.

ENTERTAINMENT NEWS - "Alephia 2053", an Arabic-language animated feature set in a bleak future, has struck a chord in a region all too familiar with autocratic rule and bold, bloody resistance.

Released on YouTube on March 21, a decade after the Arab Spring uprisings, the Lebanese-made thriller has already garnered more than eight million views.

The 60-minute film's success is a testament to the growing popularity of online streaming platforms because of the coronavirus pandemic.

But it is also "proof that the movie reflects people's thoughts", says Rabih Sweidan, the film's Lebanese creator and executive producer.

"Everyone sees it from their perspective and they see themselves and their communities in it."

The storyline, set in 2053 in the fictional Arab state of Alephia, follows a group of undercover agents plotting to take down hereditary ruler Alaa Ibn Ismail and his autocratic regime, described as the most tyrannical in the world.

Through a meticulous operation led by operatives who have infiltrated top regime ranks, the "resistance" succeeds in toppling the dictator in a coup and ending a century of autocratic rule.

They are buoyed by crowds taking to the streets chanting the now-famous Arab Spring refrain - "the people demand the fall of the regime" - in the face of heavily armed security forces who respond with live fire.

The movie closes with a familiar scene: fists are thrown into the air as a euphoric crowd pulls down the statue of the fallen dictator with ropes.

Sweidan says Alephia 2053, with its uncannily familiar-looking dictator figure, is "a fictional movie but it is based on reality. It is a description of social reality".

It is not inspired by any single Arab country but depicts conditions familiar to many across the world, he says.

"The world has become a small village, where the situation is the same in more than one place," Sweidan adds.

"Alephia could be the 23rd country in the Arab League," which has 22 members.

The animation, directed and illustrated by Jorj Abou Mhaya, is produced by Lebanon's Spring Entertainment company. 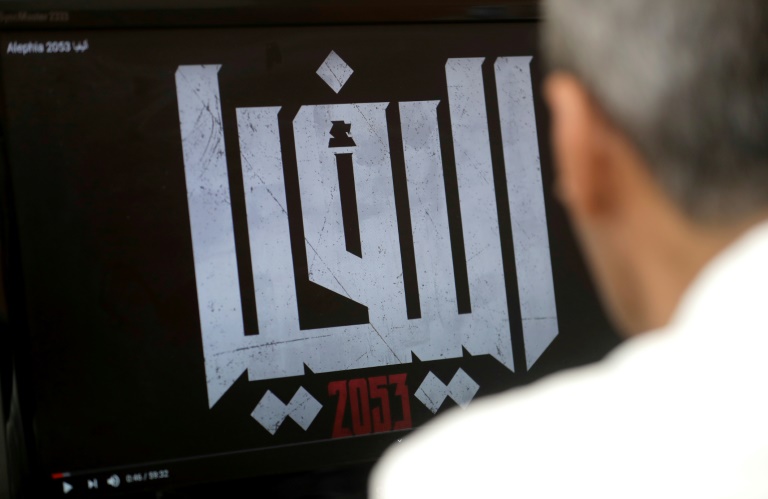 The film has clocked up more than eight million views.

"More than 70 percent of the work took place in Lebanon and was done by Lebanese," says Sweidan, though it also received backing from Malil'Art animation studio in Angouleme, France.

Though the movie is highly reminiscent of the 2011 uprisings, Sweidan says it is an attempt to break away from what he calls an obsession with the past.

"There is always a tendency in the Arab world to imagine what might have happened in the past, but there is no theatrical or cinematic work that imagines what the Arab world will be like in the future," says Sweidan, who first thought of the plot four years ago.

"The idea for the film came from a question: What will the Arab world look like in 20 or 30 years?"

According to Sweidan's vision, the future holds more promise.

The film tries to express this through colour grading: the closing scenes incorporate a livelier gradient than the dim and dusty scheme that dominates the first chunk of the film, says Sweidan.

"What this film wants to imagine is a future that's not as bad as the past or the present."

"It portrays Arab reality, and its audience just keeps on growing."