After a dark year, Broadway sees light at the end of the summer

Broadway theaters need to fill at least 75 percent of their seats if reopening is to make any economic sense.

ENTERTAINMENT NEWS - "We will be back!" a dozen singers proclaimed in the middle of New York's Times Square, in a pop-up event commemorating the one-year anniversary of Broadway going dim. A clear sense of optimism filled the air - despite the "Closed" signs still darkening the doors of nearby theaters.

With the latest wave of Covid-19 now under control, amid a massive vaccination program and as some theaters partially reopen, New York is "definitely starting to get some more life right now," said Ryann Redmond, who performed in the musical "Frozen" before the pandemic forced Broadway's closing on March 12, 2020.

"People need it more than I think the whole world understands," Redmond said as she participated in the event alongside three or four dozen other actors and dancers.

Despite a decision by New York Governor Andrew Cuomo to allow theaters to reopen at 33 percent capacity, with a maximum of 100 people indoors as of April 2, the hard reality is that Broadway, with its compact theaters and huge production costs, won't be joining them right away.

"We're thrilled that he's doing it," Charlotte St. Martin, president of The Broadway League association of producers and theater managers, said of the governor's plan, but "we're still looking at the fall."

Broadway theaters need to fill at least 75 percent of their seats if reopening is to make any economic sense, she said. 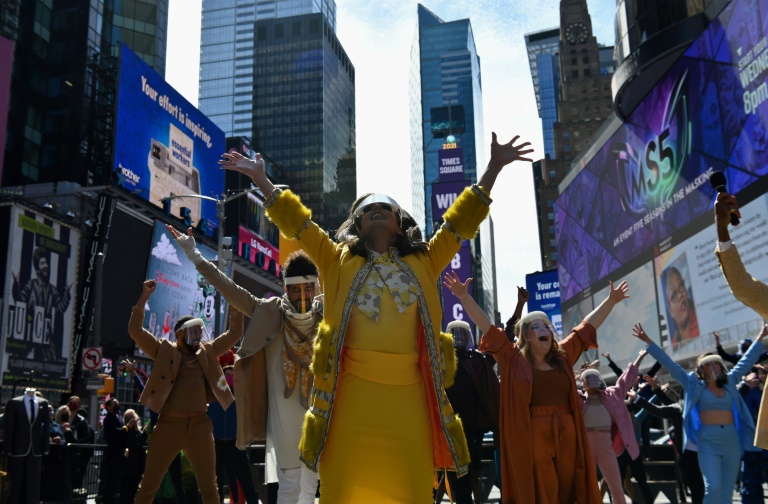 Broadway theaters need to fill at least 75 percent of their seats if reopening is to make any economic sense, experts say.

And despite the governor's announcement, local authorities, she added, have yet to decide when, or under what conditions, theaters can reopen.

Everyone is counting on an indication from Anthony Fauci, the White House coronavirus advisor, who said in January that theaters should be able to reopen by "early to mid-fall" with an end to the pandemic finally in sight.

"There has to be a plan," said Clayton Craddock, a drummer who was working with the musical "Ain't Too Proud" until the theaters shut down.

Despite losing 12 months of revenue and probably six more to come, only a handful of productions - three musicals and two plays - have definitively thrown in the towel.

That leaves 31 shows positioned to start up again in the fall, along with a few new additions, including a revival of "The Music Man" and "MJ: The Musical," with music and lyrics by Michael Jackson. 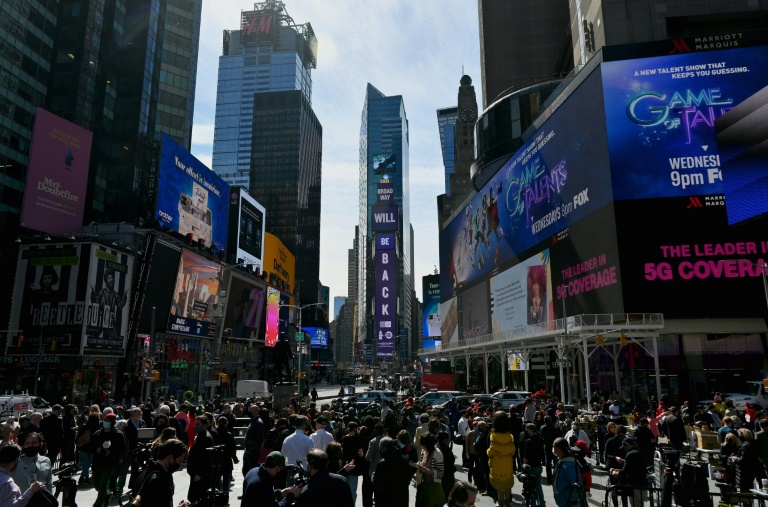 People watch the Time Square event on the one year anniversary of Broadway's closure.

Musicians, actors and technicians are largely surviving on unemployment benefits, most with no health insurance, though the stimulus package passed this week by the US Congress might help, St. Martin said.

But some performers or stage hands have given up for good. Craddock took some software classes, and he almost became an insurance agent.

"But I realized... my talents are not in financial services, insurance and information technology," he said.

"I have honed my skills, playing drums for the past 45 years. I'm not going to give this up. This is what I do best."

Nor has a year out of the spotlight dampened the passions of many other Broadway professionals.

Friday on Times Square, when the first familiar notes of George Benson's "On Broadway" sounded, a powerful chorus of voices - some quavering with emotion - quickly joined in. 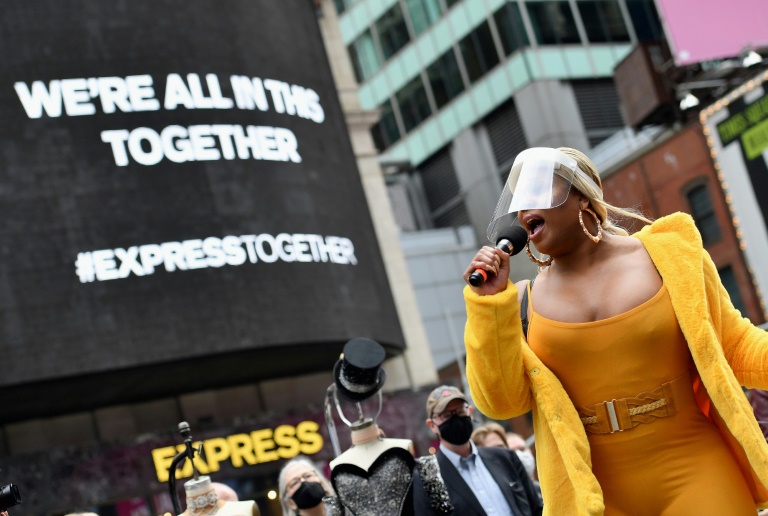 Performer Peppermint, who in 2018 became the first transgender woman to play the leading role in a Broadway musical, participates in the live pop-up event.

"It was wonderful," said Peppermint, who in 2018 became the first transgender woman to play the leading role in a Broadway musical, "Head Over Heels."

"I can sing in the shower all day long," she said. "But when you get to hear somebody, see somebody's reaction and see that it affects them, and then if that affects you, that's an emotional exchange."

Redmond has found work only on television and in cinema for the past year, but there's no rust in her voice, which she lent to the character of Olaf the snowman in Broadway's "Frozen."

"You know, we've been doing a lot of Zoom musicals and lots of voice recordings at home," she said. "So I've just been trying to keep it going, because it is a muscle, like an athlete - so just trying to do it every day."

Disney permanently canceled "Frozen" last May, but Redmond said she hopes to find "something else" when Broadway reopens.

Even if the performers gathered at Times Square on Friday seemed ready to return to the stage at the drop of a hat, St. Martin said most Broadway productions need at least three or four months to resume operations.

"So ideally," she added, "we'll be told June 1 if we're going to be able to open in September."


I'm a 51 year old woman looking to meet men and women between the ages of 48 and 60.
View Profile