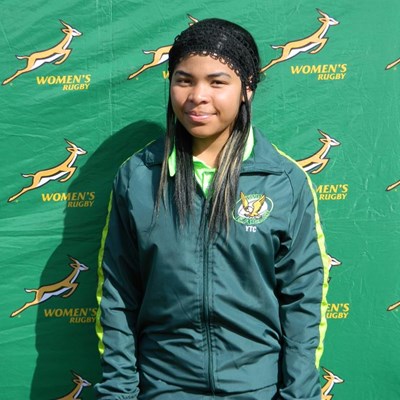 Faith Gosling is a rising star in women's rugby. Photo: Supplied
KNYSNA NEWS - Faith Gosling, a member of Greater Knysna Titans' Women's Rugby Club (WRC), a women's rugby club with its origins in the greater Hornlee area of Knysna, has been named as part of the 2016 SA Rugby Girls u/18 high performance squad that will gather in East London from October 2 to 7 for a high-performance training camp.
“During the 2013 season I recall telling Faith if she keeps working hard and pays attention she will become a Springbok one day, and that she does possess the talent to go all the way… Today we received the email that puts her one step closer to that dream, to follow in the footsteps of former Titans captain Mathrin Simmers to represent the Springboks,”- said Coach Ash.
The Titans Women’s rugby club was informed on Monday, September 12 that Gosling has been selected to be part of the SA Rugby girls u/18 high-performance squad. She is one of three players from SWD selected to represent the SWD rugby union in the squad.
The Titans WRC have over the years established themselves as the most successful sports club in Knysna with the most success in converting players from grassroots to national level. Last year, Chante Cornelius, a former pupil from Sunridge Primary School and member of the Titans WRC and Kaiwhana Titans Rugby Academy, was also selected to represent the club in the SA Rugby girls u/16 high-performance squad, while Prelene Pegram represented the club in the same squad during the 2013 season with Gosling, while Ezryn van Aswegen represented the club in the SA women’s u/20 team at the 2013 Nations Cup. This journey of success was all started with former Titans captain Mathrin Simmers who first represented the club in the Springbok women’s team and later in the SA women’s sevens teams.
“We at the Titans WRC are extremely proud of each and every one of these players’ successes over the years, as it all in combination gives hope to youngsters in the community where negative down-thumb activities and challenging social surroundings are a common phenomenon. Gosling can make the step up and become a very long-serving Springbok if she remains humble, works hard and is dedicated. As her coach I am extremely proud of her and the extra grey hair she gave me over the years is starting to become worth it, ” said Coach Ash.
The Titans Women’s Rugby Club is open for any females who are interested to join the team. Training is at the Hornlee sports field Monday to Thursday from 17:00 to 19:00. There is also a primary school girls' development programme that is facilitated by the Kaiwhana Titans Rugby Academy, which conducts training sessions at Hornlee Primary School Monday and Wednesday from 14:00 to 15:30, for all girls under the age of 14, and Tuesday and Thursday at Sunridge Primary School the same time.
"We will soon start with this programme at primary schools in the northern areas as well," Coach Ash assured.
"We are currently searching for volunteer coaches who have a passion for rugby development and, most importantly, a passion for women’s rugby, to assist us with our development programme. Coaches will be paid a stipend of R600 a month for 64 hours of coaching per month," he concluded.
* If you are interested, please contact Coach Ash at 073-253-8809 or email titanswrc@gmail.com.
'We bring you the latest Knysna, Garden Route news'