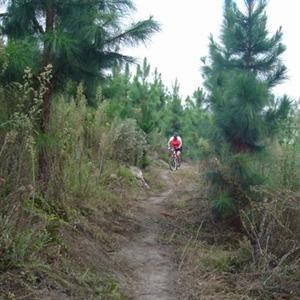 Different type of territories will be experienced on the Honey Trial, the Garden Route’s own family-friendly MTB challenge.
GARDEN ROUTE NEWS - Entries are now open for the new three-day Honey Trail stage race from Mossel Bay to Plettenberg Bay that will get under way on September 9.

The Honey Trail - named for the Khoi-san word for the mountains that the course will traverse (‘Outeniqua,’ which means ‘men laden with honey’) - is the brain child of local rider Sam Nienaber, who designed the event to take best advantage of the tourism potential of the region.

"What will set this race apart is both the fact that participants will be staying in hotels and guest houses rather than in tented race villages, and the fact that we’re encouraging the riders’ families to book places in the same accommodation establishments," he said. "So after riding until lunchtime, there’ll still be time to meet up with your supporters and, for example, head off to the beach in the afternoon."

Averaging about 85 kilometres a day, the teams will overnight in George and Knysna, but many are expected to spend the nights before and after the race in Mossel Bay and Plettenberg Bay.

The entry fee of R5 750 per team will include accommodation, breakfast and lunch on all three days of the race, and special packages have been created for supporters and friends. Supper is not included in the race cost.

The race will begin on the edge of the sea at Mossel Bay’s de Bakke Resort, with the first day’s riding ending at Fancourt in George, the second day at Portland Manor outside Knysna, and the final day at Plettenberg Bay’s Crescent Country Hotel.
While the race is not a charitable event, the organisers have pledged that any surplus funds will benefit the Southern Cape’s transformation and development riders. Entries for the 2011 Honey Trail are open at www.honeytrail.co.za/register.
Posted on: 10:52 Wed, 06 July 2011