Biden, a veteran Democratic senator who also served as vice president to Barack Obama, was set to travel to Washington on Tuesday with his wife Dr Jill Biden from their hometown of Wilmington, Delaware.

President Donald Trump has one last full day in the White House.

POLITICAL NEWS - President Donald Trump began his final full day in the White House Tuesday with a long list of possible pardons to dish out before snubbing his successor Joe Biden's inauguration and leaving for Florida.

On Wednesday at noon, Biden will be sworn in and the Trump presidency will end, turning the page on some of the most disruptive, divisive years the United States has seen since the 1960s.

Biden, a veteran Democratic senator who also served as vice president to Barack Obama, was set to travel to Washington on Tuesday with his wife Dr Jill Biden from their hometown of Wilmington, Delaware.

Together with incoming vice president Kamala Harris - the first woman ever to hold the job - Biden was due to deliver an evening address on the Covid-19 crisis, from the Lincoln Memorial Reflecting Pool.

By contrast, Trump has remained uncharacteristically silent as the clock ticks down to his departure to a new life in his Mar-a-Lago golf club residence in Palm Beach.

Banned by Twitter for his stream of inflammatory messages and misinformation, he has largely stopped communicating with the nation. He has also yet to congratulate Biden or invite him for the traditional pre-inauguration cup of tea in the Oval Office.

Instead, Trump has spent his time meeting with a dwindling circle of loyalists who backed him during a doomed, two-month effort to overturn the results of the November election.

That effort culminated on January 6 with Trump encouraging a crowd to march on Congress. 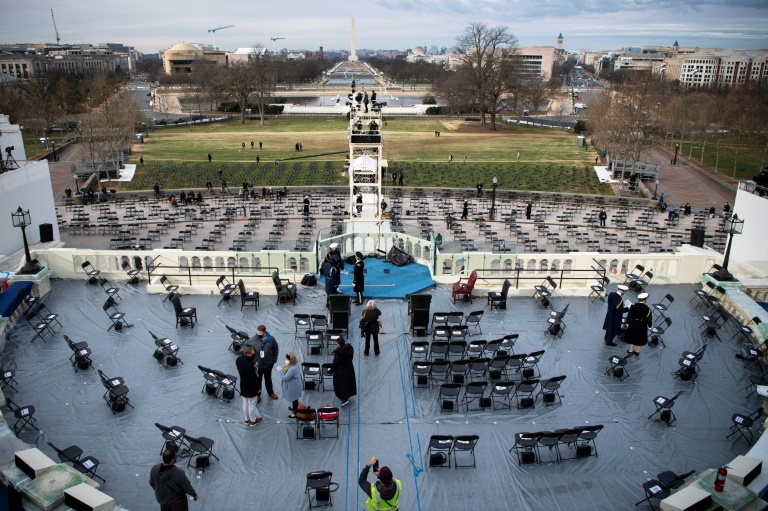 Final preparations are underway at the US Capitol for  a socially distanced inauguration.

After the crowd broke through police, killing one officer, and trashed the hallowed Capitol building, Trump was impeached for the second time in just over a year - another first in a presidency of many firsts.

His final Gallup poll as president on Monday showed him exiting with 34 percent approval, his record low. Trump's overall average of 41 percent since taking office is also the lowest for any presidency's approval rating since Gallup began measuring in 1938.

Biden, meanwhile, is putting the finishing touches to an inauguration that will feature a small crowd and massive security - more fallout from the pro-Trump riot, on top of existing concerns about Covid-19. 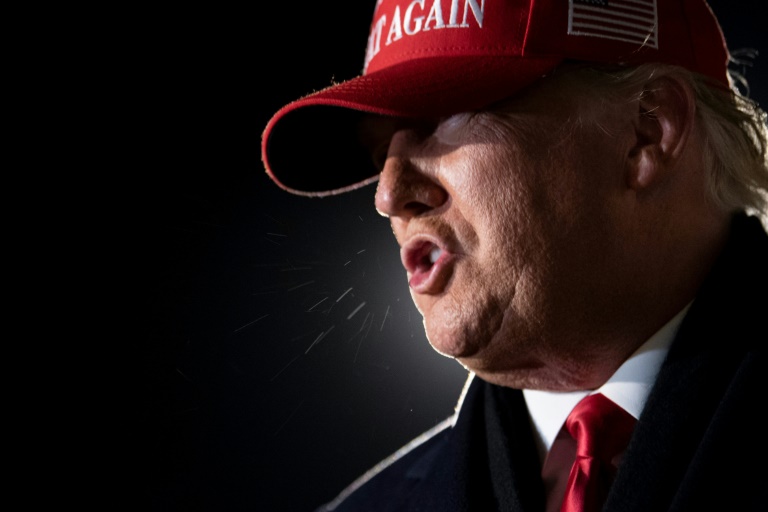 Donald Trump is largely out of sight in his final days as president.

Pardons
Trump issued a scattering of last-minute orders on Monday, most notably a lifting of the travel bans imposed because of the coronavirus on most of Europe and Brazil.

Under Trump's order, borders were to have reopened from January 26, almost a week after he leaves office. Responding almost immediately, Biden's spokeswoman Jen Psaki said the measure would not stand.

For Trump, the main piece of unfinished business is now the expected slew of pardons that he is reported to be preparing.

According to CNN and other US outlets, Trump has a list of about 100 people he will grant clemency to.

After what The New York Times reports has been an intense lobbying effort, these are expected to be a mix of white-collar criminals and people whose cases have been championed by criminal justice activists. 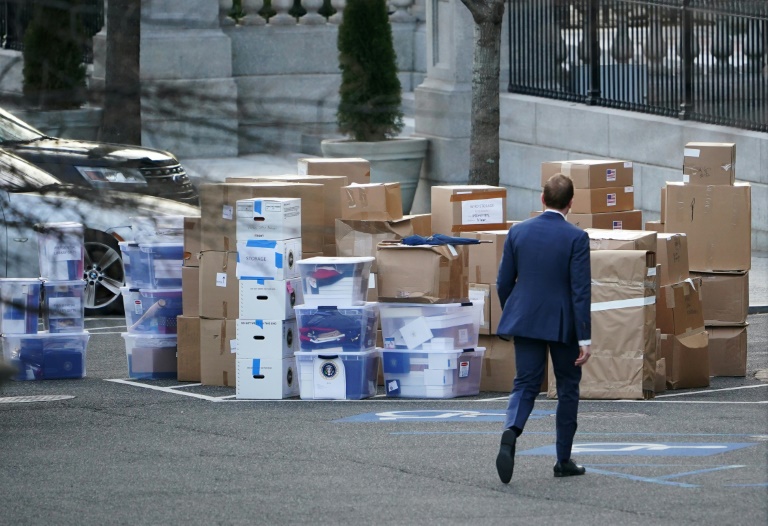 The movers are busy at the White House.

More controversial possible pardons that have been the subject of speculation for months would be for the likes of Edward Snowden, Julian Assange and Trump's influential advisor Stephen Bannon.

If Trump gave himself or his family a pardon - something currently not expected, according to latest US reports - that would likely harden anger among previously fully supportive Republicans in the Senate, which is expected to start an impeachment trial soon after Biden takes office.

Unity and fear
Biden's inaugural speech is expected to focus on his appeals for Americans to reunite and to take on the Covid-19 pandemic with new seriousness.

But the 78-year-old Democrat's fervent appeals for optimism and healing are running up against the hard reality of multiple crises. 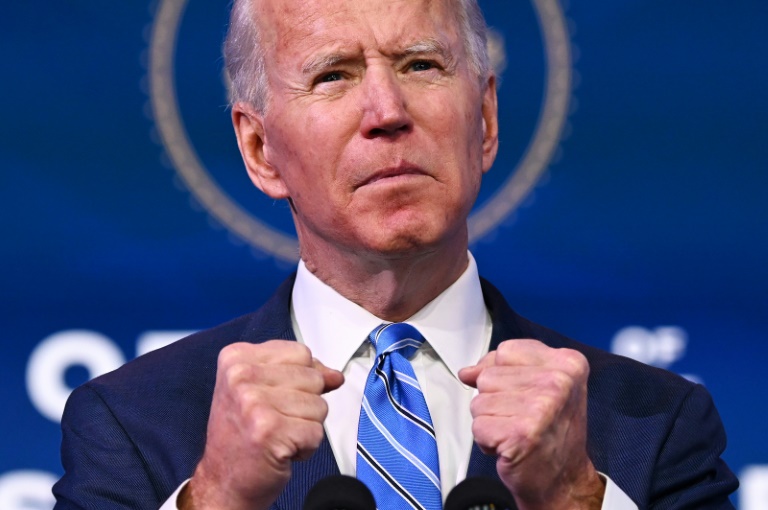 Covid-19 is out of control, vaccine distribution is stumbling, and economic recovery remains in the balance. And after Trump's refusal to accept the results of November's presidential election, the country is seething.

Biden will take the oath of office on the steps of the Capitol under the protection of more than 20,000 National Guard soldiers. Checkpoints and large zones closed to ordinary citizens mean there will be only a smattering of guests.

The acting defense secretary said Monday that the military and FBI were vetting the National Guard troopers, who carry automatic weapons, in case any of them pose a threat.

Inauguration snub
Trump, the first president to lose reelection since George H.W. Bush was replaced by Bill Clinton, will also be the first ex-president to snub his successor's inauguration in a century and a half.

On Wednesday, he will depart for Florida from the White House early, in order to benefit from full presidential travel privileges up to the last minute. 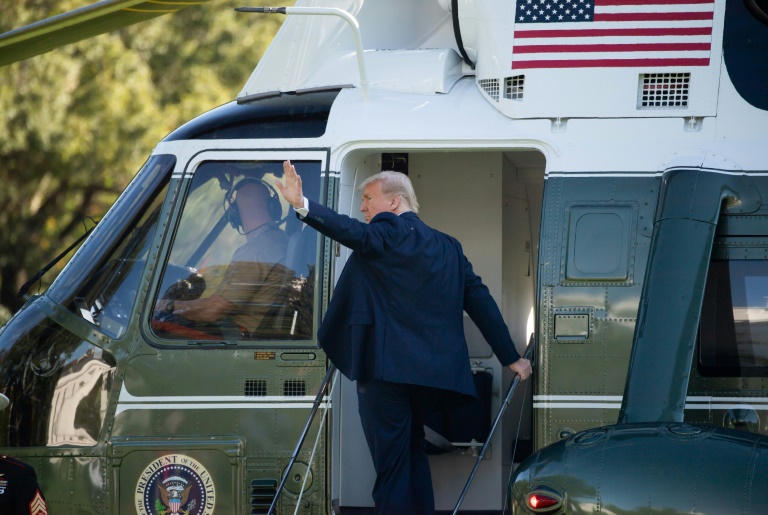 President Donald Trump will leave on Marine One, then go to Florida.

Marine One will take him from the White House to Joint Base Andrews to catch Air Force One - the presidential plane that, from noon, will no longer be his to use.

According to a Bloomberg report, Trump is organizing a military sendoff for himself at Andrews, watched by a crowd of invitees.