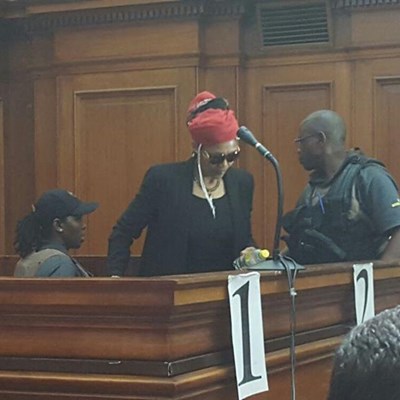 Maqubela, who was sentenced in March to 18 years in prison for killing her husband, acting Judge Ntobeko Patrick Maqubela, was granted leave to appeal her murder conviction by the high court in August.

Maqubela is applying for bail, pending the outcome of the SCA appeal of her murder conviction.

The High Court had denied her application for leave to appeal her fraud and forgery conviction – which related to her altering her husband’s will.

During Tuesday’s bail application, her legal representative advocate Thomas Tyler said Maqubela had petitioned the SCA to appeal her three-year sentence on the fraud and forgery conviction.

“It’s confidently expected that she will get leave to appeal on both sentences on the grounds we’ve advanced,” Tyler told the court.

Tyler further argued because the trial court had deemed an appeal on her murder conviction had a “reasonable prospects of success”, she should be granted bail.

“If an accused person had a strong case or prospects of success on appeal it’s unlikely that person will flee.”

Judge Maqubela’s decomposing body was discovered in his luxury Bantry Bay flat two days after he was murdered in June 2009. Following the discovery of his body, it became apparent that the judge had been suffocated with a piece of cling wrap.