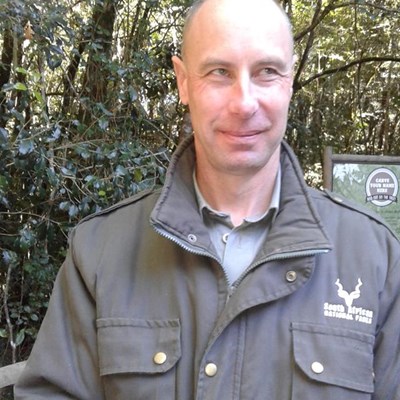 Area manager for Knysna, Johan de Klerk, introduces the new experience.
KNYSNA NEWS - The Knysna forests managed by the South African National Parks as part of its Garden Route National Park (GRNP) make up around 42,000 hectares of land across the coastal stretch from George to Tsitsikamma in the East.
The forests which were formerly managed by the Department of Water Affairs and Forestry include Farleigh, Diepwalle and Tsitsikamma are now managed under the GRNP for conservation.
The forests were exploited prior to 1939 when the Government decided to close them to the woodcutters’ system. Between 1940 and 1964 the government focused largely on plantations.
With an estimated 400 elephants walking the Knysna forest in 1876, over 280 species of birds and a population of woodcutters living in the forest, how much can we learn from recorded and oral history?
In order to do this, the GRNP team worked closely with the Knysna Historical Society and other stakeholders to establish a historical route in one of the country’s largest individual forests. Through a self-drive route launched on June 29, visitors to the Garden Route can now drive to 10 marked historically significant locations in the Knysna forest.
The route comes with a map of the 10 areas dubbed ‘rooted in time’. There are explicit signs at all 10 places detailing historical accounts at each stop.
The Knysna Historical Society’s Phillip Caveney, introduced various key players and events in recorded colonial history such as: The 1864-1868 Thomas Bain and the Uniondale Road; the site of 1882 and the Deep Walls Forest, Sawmills at Deep Walls; James Henry Templeman and the building of the Stone Cottage at Deep Walls; the early occupants of the stone cottage, Oudebrandpad and the naming of the King Edward VII Tree and the South Western Railway.
Area Manager for Knysna, Johan de Klerk says this is the first of many products to be launched in Knysna. The GRNP team is planning to facilitate a workshop with various stakeholders including the Knysna Historical Society, the George Historical Society, the National Heritage Council (NHC), the National Heritage Resources Agency (SAHRA), tertiary institutions and individual researchers to include African history in existing recorded work.
“‘This is a big project to include input from various role players,” said de Klerk.
This is also the first leg of a bigger route to be launched in the GRNP to run from Wilderness to Knysna to Tsitsikamma.
SANParks Head of Socio-economic development, Paul Daphne, says the organization prioritises historical and cultural assets because history accounts for happenings and events in the past to be able to understand the future.
One of the questions being asked is: “What is the understanding about the culture at that time?
What were the values of the time? What can be deduced from evidence of machinery now protected as assets by SANParks? Most importantly, what lessons have emerged from back in time? Are the forests and its people able to coexist better today than they did back then?”
Caption:
For more information contact Nandi Mgwadlamba on 044 302 5633 or email nandi.mgwadlamba@sanparks.org
'We bring you the latest Knysna, Garden Route news'