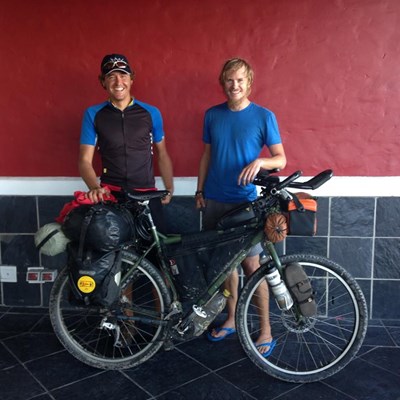 Willi Kroeker (left) and Grant Christie share a passion for adventure. Their paths crossed when their respective journeys brought them to Plettenberg Bay. They are photographed here with Kroeker's travelling bicycle.
PLETTENBERG BAY NEWS - Two intrepid travellers crossed paths in Plettenberg Bay on Monday, March 10. Grant Christie is a South African,who started walking from Alexander Bay on the West Coast in October 2013 and intends walking to Kosi Bay on the KwaZulu-Natal North coast, carrying all his possessions on his back.

Willi Kroeker is a German citizen who started cycling down the East Coast of Africa in February 2013 and is currently en route to Cape Town.

The two made an instant connection when they ran into each other at the Market Square shopping centre where Christie was picking up supplies for the next leg of his journey from Plett to Nature's Valley after a night's respite at the home of family friends in Keurbooms.

Christie was born and raised in Pretoria. He studied Civil Engineering but said he realised long before he had completed his degree that this was not where his passion lay. He nonetheless finished what he had started and spent three years working off his student loan in Pietermaritzburg before he set off on his current adventure.

Both Christie and Kroeker were reasonably fit before they set out on their respective adventures. They agreed that their bodies soon became used to the rigours of life on the move. Both said that people along the way had been generally friendly and supportive of their respective endeavours. While the young men are equipped to camp along the way and carry enough food in their packs, many people had opened their homes to them.

Although people they come across often express concern for their safety when they hear what these guys are doing, Christie said, "Chasing your dream is worth every risk. Fear is what holds so many people back. It is a risk to quit your job and head into the unknown."

Kroeker laughed, "We are young and reckless," he said, to which Christie retorted, "Youth is a state of mind. So many of our fears are unfounded, the result of sensationalist propaganda." Kroeker said. "Usually if you stay out of the city, you stay out of trouble."

The two men have much in common, including the fact that their families have been supportive of their expeditions. "A supportive family makes a big difference," said Kroeker. They also share an appreciation for small things and seemingly inconsequential details by ordinary standards which can make all the difference when one is on the road. Kroeker will return to Germany at the end of April.
It took Christie three days to walk from Knysna to Plettenberg Bay along this treacherous stretch of coastline. Overcoming the sheer cliffs, sharp rocks and dense forests proved a harrowing experience.

He called the journey Six Million Steps because that is the number of steps he estimated would be required to complete the 30 000km journey along South Africa's coastline.

"The success of the project depends on the ability to document the journey and thereby relate the story to the public as it unfolds through written, photographic and video updates as well as talks along the way," said Christie.
Although Christie has a website, he regularly updates his Facebook page along his way. Those interested in supporting him can follow his journey on www.facebook.com/sixmillionsteps.

Christie's expenses are self-funded although his shoes are sponsored by Vibram FiveFingers, a solar charger is sponsored by Powertraveller (supplied by Wintec Solutions) and a pedometer and action camera sponsored by Oregon Scientific (supplied by Imtech Marine). He can be contacted via his Facebook page.

Christie reached Port Elizabeth on Monday, March 31 bringing him to the two-thirds mark on his journey.