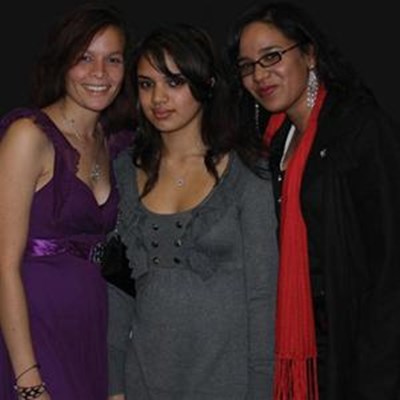 Portia Maree, Marochel Cronjé and Luretha Cronjé of LMTL Entertainment want to within six months complete a horror movie Outcast which will be filmed in Knysna.
SOUTHERN CAPE NEWS - Three determined, young women, Luretha Cronjé, her sister Marochel and Portia Maree of LMTL Entertainment, want to make a series of horror movies and shoot them all locally.

They cut their filmmaking teeth on their own homegrown movie - A Date with Destiny which premiered at the Garden Route Mall last year. "During the project we were blessed with getting experienced technical people on board. The film Outcast is therefore going to be a platform for skills development and skills transfer. We anticipate that this will work out very well because currently we do not have the resources to hold training workshops," said Luretha who is the director once again.

"We decided on a horror movie because we want to do something totally different this time. And this movie is a form of escapism for viewers, there will be no subliminal message. We want to in some way revive the horror genre because the current horror films we see today is tasteless and tactless," said Portia who took care of the after effects doing photography and graphics.

The women have a busy six months ahead of them in which they not only want to finalise the planning, they will be looking for crew, cast, doing training and then filming over weekends followed by editing.

"Each movie will have its own atmosphere and this will give us a chance to use different styles, but the overall story will remain the same. "There is always place for a female heroine and but in Outcast Ben is the male lead," said the women.

"We at LMTL Entertainment, would like to thank the town of George for their support during the filming of "A date with destiny" it was a wonderful learning curve and the experience of a lifetime. We glimpsed the hidden talent and beauty this town has to offer and would love to develop it some more. So we hope that during our new project we will find the same support from George and the surrounding towns," said Luretha.

"The film is basically about, Ben who is a typical outdoor type of guy, who takes some time to himself to go for a hike. Upon his return he is alarmed to find his pregnant wife missing. On top of that, the town of Knysna is completely deserted except for the dead that seem to be alive... Not knowing what happened while he was gone, he goes on a quest to find his wife and to find out why he's the only outcast in the land of the dead..."