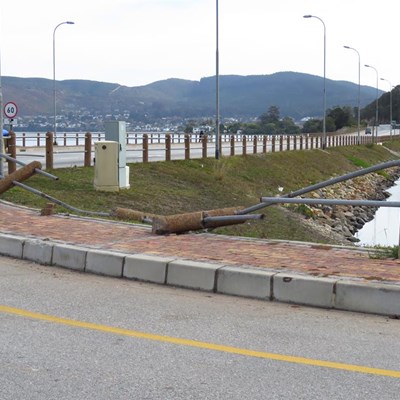 On the corner of the N2 and Simola/Ou Kaapse Weg turn-off. Photo: Stefan Goosen

Well most people's nightmare is of smiling with no teeth and this has now become the fate of Knysna.
A smile that is supposed to greet visitors to Knysna who enter the town on the N2 from the direction of George should be a good road, neat pavements and barriers - but alas.
The barrier, or guardrail, along the N2 has three gaping gaps:
• On the lagoon-side, opposite the entrance to Azalia Street.
• Also on the lagoon-side, just before the Simola/Ou Kaapse Weg turnoff (going to George).
• On the corner of the N2 and Simola/Ou Kaapse Weg turn-off.
The Simola Golf and Country Estate is just one of the many tourism-specific establishments who rely on this stretch of the N2 to attract visitors.
The Knysna municipality was asked about these gaps on May 15, and informed the Knysna-Plett Herald that the SA National Roads Agency Limited (Sanral) was the authority responsible for the barriers.
On Monday, May 29 project manager for road incident management systems at Sanral, Deneill Mitchell, said that the particular section of the road running from the White Bridge to Nekkies does not fall in Sanral’s jurisdiction.
“Hence we cannot give feedback on what happened to the guardrails. Please direct your query to either the Knysna municipality or the provincial government,” said Mitchell.
The project manager in Knysna for the department of transport and public works in the Western Cape, Simon Blyth, said he was not aware of these gaps, but also that it was not one of his projects.
It would seem then, that until the relevant authority comes forward, Knysna will not be putting its best foot forward.
Click here for a photo gallery.
Also on the lagoon-side, just before the Simola/Ou Kaapse Weg turnoff (going to George). Photo: Stefan Goosen
ARTICLE & PHOTOS: STEFAN GOOSEN, KNYSNA-PLETT HERALD JOURNALIST
'We bring you the latest Knysna, Garden Route news'
Posted on: 08:06 Thu, 01 June 2017
Your Comments