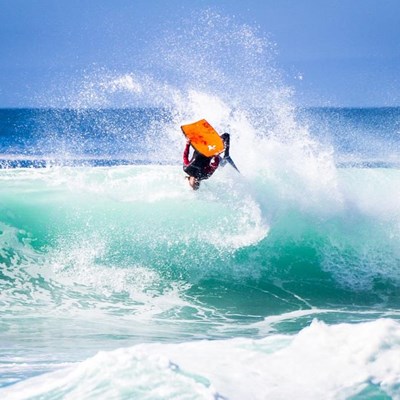 SCBA Chairman, Bjorn Coetzee, shared his excitement about the success of the event. "It was a great event, over 30 bodyboarders, from boys to grand masters drove up from all over the Western Cape to enter the competition in their respective divisions as well as a lot of supporters and spectators."

Southern Cape's youngest riders, the boys division, made the members of the Southern Cape Bodyboarding Team proud for their bravery by paddling out into the big 6ft waves on Sunday. Wian Oosthuizen took the first place position, second was Paul Rademeyer, third Cameron Watkins, fourth JP Stopforth and in fifth place Jaco Calitz.

In the women's division Janneke de Kock surfed her heart out and was excited to receive first place, Sussane Joubert got second place followed by Nikki Gericke and Trune Snyman, who is representing SCBA for her first time this year got fourth place.
In the men's division, Matthew Botha impressed the crowd securing the first place position while Andre-Hugo van Zyl took second followed by Paul Morkel in third place.

The Masters division did not disappoint as first place rider Dave Camacho landed some impressive moves followed by Morné Laubscher in second place and Deon Meyer in third.

In the Grandmasters division Rian du Preez took the first place position with 25.8 points, followed by Colin Horn in second and Cobus Louw in third.

In the Prodivision, the competition was tough, but Bjorn Coetzee's back flips, rolls and spins, got him the highest score of 52.5 points and put him in first place, followed by Andre-Hugo van Zyl in second and Matthew Webster third.

"Congratulations to all the riders and I personally want to give a special thanks to all the support of the parents, girlfriends and wives," Bjorn said.

The SCBA team wants to thank all the sponsors for their contribution for the Southern Cape Champs including Reef South Africa, Botlierskop, Garden Route Game Lodge, Mossel Bay Backpackers as well as a thanks to Big Blue Restaurant for hosting the prize giving event.