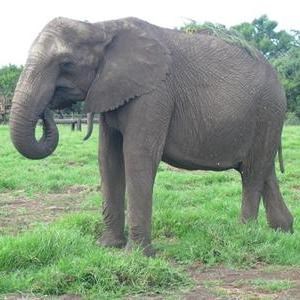 Craig Saunders, owner of Elephant Sanctuary, said that he and the staff are devastated. "We tragically lost a member of our family," said Saunders. He said that he had monitored the herd and they had not displayed any signs of stress.

"She passed away peacefully," said Saunders. The herd did not seem traumatised and showed no signs of temporal lobe secretions indicative of stress.

According to Brendan Tindall, the veterinarian who attended to Mopane, preliminary autopsy results indicate that heart failure was the cause of death. He said that he was not yet sure what caused the heart failure as he was still waiting for those results to be returned. He said that the pathologists were looking for indications of viral infection, and although there may be other possibilities, they were looking for the most obvious and common causes.

Seventeen-year-old Mopane had been free-browsing with the other elephants in the bush surrounding the sanctuary, when she went to lie down in an awkward position. Some of the neighbours came to assist her into a more comfortable position and she stood up.

According to Saunders, Mopane walked a few hundred metres before sitting down again. With drugs needed for Mopane, he had boarded the first available flight home from Johannesburg. Saunders explained that due to the fact that elephants do not have a pleural cavity, lying down could lead to respiratory complications.

Saunders spent the entire night with Mopane and ensured that she was kept warm. He and the team who attended to Mopane did everything in their power to save her. He found it hard to describe the tremendous impact of losing "a charismatic character like an elephant".
Posted on: 07:00 Thu, 26 July 2012