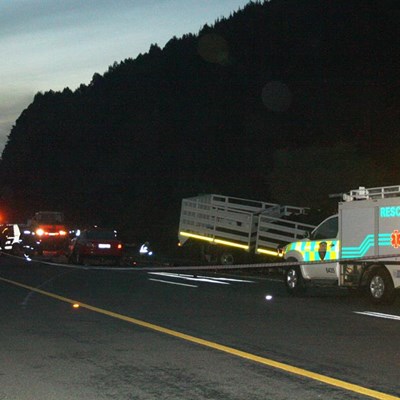 The scene of the fatal accident on Saturday, June 11 between Knysna and Sedgefield near Buffalo Bay. Photo: Christo Vermaak
KNYSNA NEWS - A fatal accident on the N2 shocked the community after a 34-year-old man, Pieter van Aswegen from Mossel Bay, died on the scene.
Western Cape police spokesperson Constable Johnatan Filander on Wednesday, June 15 released the victim's name and said, "Van Aswegen was the driver of the red Audi and he was identified by his father."
The accident took place at about 17:00 on Saturday, June 11 on the N2 between Knysna and Sedgefield near the Buffalo Bay turn-off and Groenvlei, when a vehicle and a truck were involved in the head-on collision.The truck was travelling in the direction of Knysna when the accident took place. The truck left the road and the car came to a standstill in the lane in which the truck was travelling.
Several emergency vehicles were on the scene until late that evening.
Filander on Monday, May 13 said, "An unidentified male was fatally injured and two other victims were injured. The circumstances surrounding the accident are under investigation. A case of culpable homicide was opened."
A woman who saw the accident happen expressed her concern about the way she was treated by the police when she reported it and offered to make an affidavit on what had happened.
"I drove straight to the Sedgefield police to report what I saw, just to be treated badly by the policeman on duty." She said she gave all her details to the officer, but that "nobody contacted me for my affidavit". She wants to stay anonymous in the media.
The woman even went so far as to write to the Western Cape government on Tuesday, June 15 in an effort to get the police to contact her, and said, "I am trying to move on from this traumatic ordeal."
In her letter she further wrote, "It seems that the police do not want to take any statements to get to what exactly happened, which clearly shows their incompetence. I thought that a detective would have contacted me by now."
To the Knysna-Plett Herald she described how the red Audi overtook her on a bend in the road, just after the Buffalo Bay turn-off. "He stayed in the wrong lane and it seemed like he was waiting for a heavy vehicle to drive head-on into. The car went straight for the oncoming truck and never did the driver make an effort to get back into the left lane."
She said the driver stayed in the wrong lane for about five seconds before he struck the truck.
Click here for previous articles: