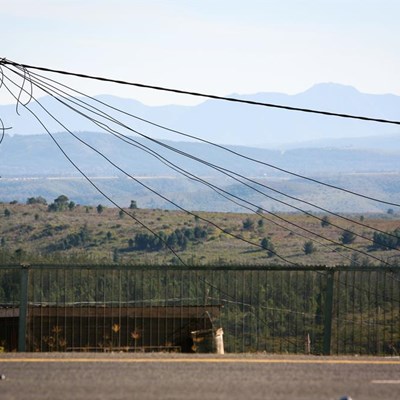 The Bitou Municipality is taking a strong stance against electricity theft. Photo: Ewald Stander.
PLETTENBERG BAY NEWS - Bitou municipal manager Allen Paulse and his team delivered on their promise of swift action against senior municipal officials allegedly linked to large-scale electricity theft case when five employees were suspended this week.
Paulse also took his zero-tolerance stance a step further by cutting the illegal electricity connections of all those involved.
The municipality recently identified 47 municipal employees who could possibly be involved in electricity theft after an internal forensic investigation to find the source of electricity losses of about R9-million during the past financial year. This followed the release of shocking figures highlighted in Auditor-General Kimi Makwetu’s report last year.
The investigation, carried out by independent auditors, revealed that 47 employees, including several senior officials, had not purchased electricity for extended periods, sometimes for five years or longer.
After a sting operations involving local police and independent electricians last week it came to light that 40 homes had bypassed electricity metres. Seven homes could not be accessed at the time due to resistance from residents.
Paulse said since then, his team returned to the homes and found that another four metres had been tampered with.
By Monday, February 2, 11 illegal electricity connections had been cut, while the remainder had been disconnected by Wednesday morning.
He added a decision was made to suspend senior officials with immediate effect as they “abused their position of trust”. “We therefore suspended five officials, two of whom are municipal electricians, by Tuesday morning,” Paulse said.
Paulse said the suspensions were across most departments within the municipality.
The rest are required to continue working throughout the disciplinary process as Paulse said he did not want employees “sitting at home earning a salary for a few months” while there was work to be done.
He further said that all the employees linked to the theft would now face disciplinary action, which should be completed over the next two months.
If the employees are found guilty of electricity theft they will be dismissed. Paulse said this could also be followed by criminal charges as the municipality had a responsibility to report theft to the police.
The crackdown on electricity theft would be rolled out to the Greater Bitou community in the near future.
'We bring you the latest Plettenberg Bay, Garden Route news'