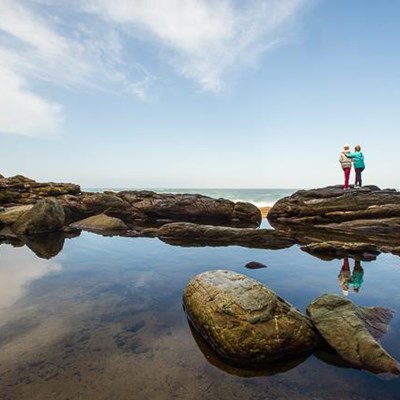 A large freshwater pool on the coastline of the Otter Trail in the Tsitsikamma Marine Protected Area, Garden Route National Park.
GARDEN ROUTE NEWS - Research conducted by South African tourism in 2007 indicated that some five million citizens had the means and the desire to travel. This led to a campaign to encourage locals to explore their own country more.

Global travellers have a desire to venture into "untouched and unique places", according to a popular global blog (treksoft.com). Travellers are on the lookout for unique and original experiences.

This year's activities for SA National Parks Week will explore the Garden Route's hidden gems - untouched unique places - with local citizens through guided hikes. Wilderness daily activities include circles in the forest hike, the Woodville big tree hike, the Half Collared Kingfisher trail hike and the Dune Molerat hike. Visitors can relax to soothing sounds during a sunset serenade in the park. Similarly, there are guided ventures into the forest planned for Harkerville, Diepwalle and the Garden of Eden as well as educational talks (mainly seahorses and birds).

There is a deliberate attempt in Tsitsikamma to get communities to have meaningful social interaction in the park such as hosting a church service in the park, a fun walk with the elderly, educational presentations to schools groups, a soccer tournament and a musical extravaganza planned for Saturday 17 September.

The park is home to over 262 bird species and protects a population of 28 species listed in the International Union for Conservation of Nature red data list. In the threatened categories, 7,1% of the park's mammals are listed as endangered and 14% as vulnerable.

The Garden Route National Park is a playground for adventurers with a cocktail of hiking trails, cycling routes, water activities and various other forest excursions.

For the events go to www.sanparks.org.za.