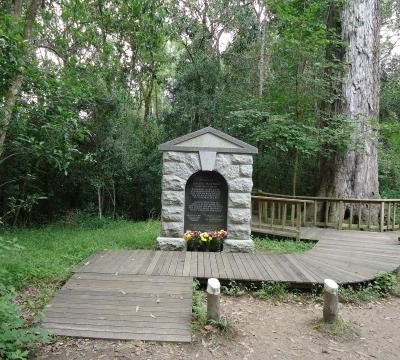 It's been ten years since Dalene Matthee's sudden death. Her family visits Knysna every year and spends time being still where she found her voice - in the forest.
KNYSNA NEWS - “Secret things are sacred things.” Wise words from a wise woman and also one of the philosophies she taught her family members who stay true to the spirit of the woman who raised them and who taught them so much about life.
"Never a dishonest word and never a reason for regret." If one keeps absolutely still in Matthee's beloved forest, it is almost as if her wisdom can be heard rustling in the leafs. Standing at the memorial stone of Dalene Matthee, a mysterious calm resonates in one's heart, similar to the feeling that lovers of her books sense in the moments after reading the final sentence.
A little distance away, stands the yellowwood tree of more than 880 years old. This tree, the Dalene Matthee Big Tree, stands majestic, quietly triumphant near Krisjan-se-Nek, her favourite spot in the forest. The tree is a quiet symbol of the natural beauty and powerful heritage so celebrated in Matthee’s books.
On Friday, February 20, Matthee’s loved ones visited her memorial stone to pay their respects. A private moment for a private family that honoured her in their own private way. Ten years have passed since her death and each year her family comes to Knysna to commemorate her, honour her legacy and spend time in the forest she loved … remembering.
Author Dalene Matthee (1938 - 2005) has been widely recognised and awarded for her immense contribution to Afrikaans literature, but Knysna is indebted to her for the enormous role she had in putting the town, especially its surrounding forest, on the map.
While Matthee penned thirteen acclaimed books, she is best known for her four 'forest books', originally written in Afrikaans, but soon translated to English and many other languages: Circles in a Forest, Fiela's Child, The Mulberry Forest and Dreamforest. All of these have Knysna's forests as a background. She is still the only South African author whose Afrikaans books sold more than a million copies.
Dalene was born in Riversdale in 1938 and began her writing career with children's stories and short stories. After a walking the Outeniqua hiking trail, she was inspired by the forest, its people and the many stories of the area to undertake a journey to research the indigenous forest and its secrets, which ultimately culminated in the'forest books'.
She has won numerous sought-after awards in South Africa. Apart from the literary awards bestowed upon her, she became the first woman and the first person outside the Department of Forestry to receive the Southern African Institute of Forestry Award (in 1986), for her books 'Kringe in 'n Bos' (Circles in a Forest) and 'Fiela se Kind' (Fiela's Child), and also for her work on the Knysna Forest, the early woodcutters' community and the development of the timber industry in Knysna. She introduced her readers to the community of impoverished woodcutters who used to live in the forest.
She also stressed how important it was to conserve the indigenous fauna and flora. Her books are based on a comprehensive study of the Knysna Forest and the timber industry in the area. The institute also commended the accuracy of the specialised, technical and historic information in her books.
Matthee's work was acknowledged abroad. In 1993, she received the Stab Award (Stiftung für Abendländische Besinnung) in Zürich, Switzerland. The annual Stab Award acknowledges significant contributions to the development of Western culture. Dalene Matthee received this award in Switzerland from the late Dr Hans Jenny for her "warm and powerful novels which give expression to her involvement with this endangered environment and to each person's fundamental right to a cultural identity" and also for her "vital literary work and her keen interest in nature conservation".
Following her unexpected death due to heart failure on February 20, 2005 Dalene Matthee's ashes were scattered at Krisjan-se-Nek, one of her favourite spots in the Knysna Forest. A memorial stone was unveiled there in 2008. At the unveiling of the memorial, an enormous yellowwood tree of more than 880 years at Krisjan-se-Nek was named the Dalene Matthee Big Tree. The name of the hiking trail starting at Krisjan-se-Nek was also renamed and is now called the Circles in a Forest Trail.
Dalene Matthee (1938 - 2005).
'We bring you the latest Knysna, Garden Route news'