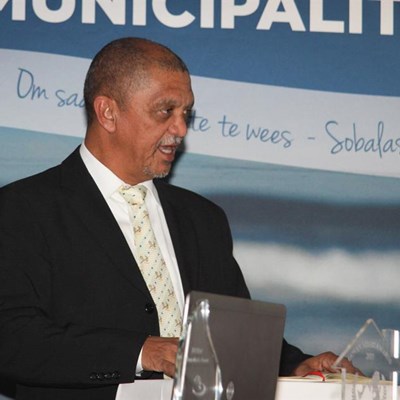 Allen Paulse, the Bitou municipal manager, will be helping beleagured Oudtshoorn municipality. Photo: Ewald Stander
PLETTENBERG BAY NEWS - Bitou Municipality management received a feather in its cap when the Western Cape government recently requested local officials to assist beleaguered Oudtshoorn Municipality get back on its feet.
MEC for local government, environmental affairs and development planning Anton Bredell requested that Bitou municipal manager Allen Paulse and chief financial officer Felix Lotter – who both played a major role in “turning Bitou around” – apply their skills to assist the Oudtshoorn Municipality on a part-time basis.
Bredell’s spokesperson James-Brent Styan said the two reported for duty on Monday, January 25.
The Oudtshoorn municipality was placed under administration about five months ago following a series of compliance issues and a political stalemate.
The final straw that broke the municipality’s back was when the council was unable to pass the current financial year's budget before midnight on June 30 – a violation of the Municipal Finance Management Act. The municipality was shortly thereafter, in August, placed under administration.
“Bredell, his department and several other stakeholders are giving their full attention to the Oudtshoorn situation – a municipality currently under administration. To assist administrator Kam Chetty, Bredell has organised the part-time secondment of officials like Paulse and Lotter to the Oudtshoorn municipality,” Styan said.
He added the aim of the intervention was to ensure the municipality was placed on “the road to recovery”.
“It is in the interest of the Oudtshoorn community that the intervention be completed as quickly and successfully as possible.”
At a council meeting on January 21 this year the Bitou council voted unanimously in favour of the secondment.
“Even the opposition supported it, with the only caveat, that all the incidental costs arising from the secondment of the two senior officials be borne by the Western Cape provincial government,” Bitou mayor Memory Booysen said.
He added the two officials had been appointed in their positions in 2012 and played a major role in Bitou’s own “turnaround strategy” – including achieving two consecutive clean audit reports – and that therefore their skills would be a valuable asset to the Oudtshoorn municipality.
When the two started in their positions the municipality was in “serious financial trouble” with a cash deficit of R15.9-million, a low debtors collection rate of 89%, depleted cash reserves, R30-million in misappropriated conditional grants, R1.7-million in unpaid statutory contributions, R4.1-million in VAT penalties and repayment and about R40-million in nonvalue for money spending.
Thanks to Paulse, Lotter and their teams the situation was radically changed over the past four years and have led to two consecutive clean audits – the first of which was Bitou’s first clean audit in a decade.
“The request from Bredell gives recognition to the skills, expertise and experience of Paulse and Lotter. Moreover it confirms the correctness of the decision by council to have appointed these officials as part of the turnaround programme for Bitou itself. It is both a major feather in the cap for the two officials, but certainly also for all of council as well as the Bitou community,” Booysen said.
He added the two senior officials had been in the driving seat of a broader dedicated team that had “wrestled Bitou from near financial ruin, if not bankruptcy, that was caused by mismanagement by the previous governing regime”.
He also said the two officials had been selected from among 30 of their peers based in the 30 municipalities across the Western Cape.
As part of the secondment Paulse and Lotter are required to spend three days a week at Oudtshoorn Municipality and as the turnaround intervention progresses, fewer days until the intervention has been successfully completed.
Acting arrangements for both officials have been made. Head of strategic services David Friedman, who has filled the position before, will be acting municipal manager while financial services senior manager Mbulelo Memani will be filling in as acting chief financial officer.
ARTICLE: YOLANDE STANDER, KNYSNA-PLETT HERALD CORRESPONDENT
'We bring you the latest Plettenberg Bay, Garden Route news'