KNYSNA NEWS - After a post on the ever-growing Facebook group #ImStaying, detailing the special bond between a local pizza chef and a four-year-old boy from Pretoria, took the group by storm, creator of the post and mother Rochelle Louw shared more surrounding the special story.

Rochelle's post has garnered 701 comments and 333 shares on Facebook, with many expressing their love of and support for the story.

Rochelle lives in Centurion, Pretoria with her son Noah, but Knysna has become their second home ever since her father and step-mother moved to the Garden Route three years ago. Noah, who turned four on Sunday 12 January, attends Nebulae Montessori in Gr RR and is a very social child, according to his mother.

Little did Rochelle realise how much this social nature could change things for them when three years ago, while visiting her parents, they decided to take Noah to a local restaurant (which requested to not be named) for supper. He immediately eyed the pizza section, but instead of getting a pizza, he gained an unexpected friend. "He just started wandering over there, he was really interested in what was going on," Rochelle said. "This was when he met Zolani, and they just clicked."

Zolani Mpe grew up in the Eastern Cape but moved to Knysna in the mid-2000s to help take care of a family member. He has since started a family in Knysna with two children of his own, but considers Noah his third child. "He's my boy. There's no doubt. I love spending time with him and we always have fun with the pizzas," Zolani said.

Zolani and Noah have been in each other's company for the past three years, and their bond has flourished despite a bit of a language barrier. "Noah's still developing his speech and only speaks Afrikaans, and Zolani speaks a little Afrikaans, but they understand each other. They have their own lingo," Rochelle said with pride.

To see her son develop this kind of bond at such a young age is really special for Rochelle. "As a parent you always want your child to develop healthy relationships, and I'm proud that this bond has come with Zolani."

Rochelle describes Zolani as a "gentle giant", someone that Noah has taken on as his role model. Whenever they come to Knysna, their trip is never complete for Noah if they don't visit Zolani. "And make no mistake, they're not going to the restaurant, oh no. If you ask Noah then he'll tell you they're going to 'Zolani se plek' (Zolani's place)."

The moment they arrive at the restaurant, Noah is up and out of the car before anyone can blink and busy searching for Zolani. Once they make eye contact, a proud Zolani can always be heard saying "ah, Noah, my boy is here". By now, Zolani knows exactly what Noah wants – a Hawaiian pizza. "He might sometimes want no ham, or no pineapple, but when he can't choose I just give him the ingredients and he does it himself," Zolani said.

The two typically spend their time playing with dough, making various animal shapes and anything Noah can think of. "To see them together is something beautiful," Rochelle said.

For Rochelle, her favourite part about Knysna is the friendliness of the people, something she feels contributed to Zolani and Noah's friendship. 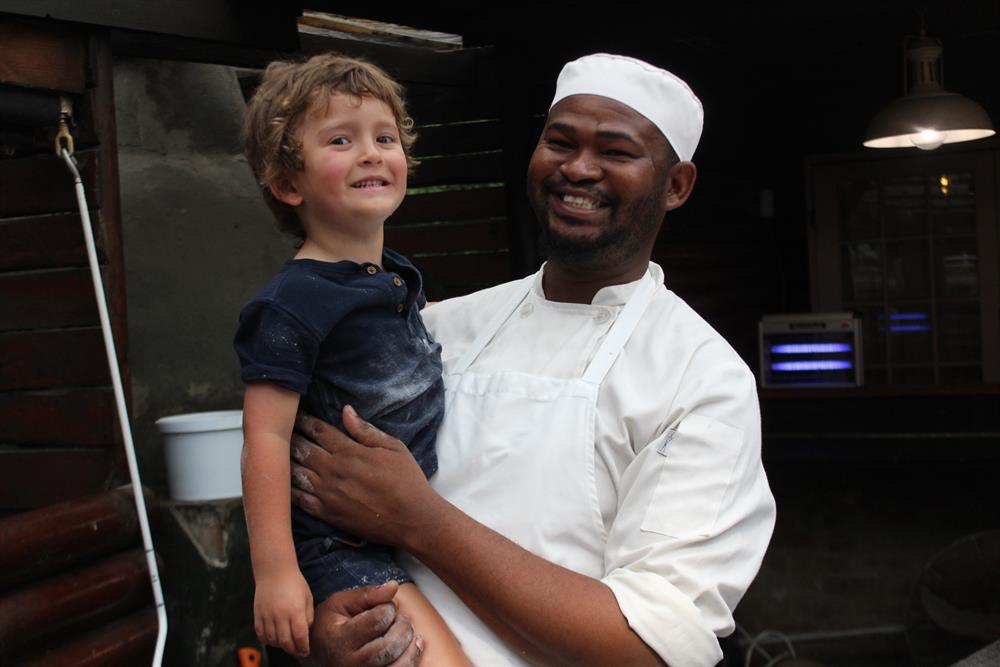