50th Anniversary Edition GT-R celebrates a half-century of probably the most iconic Nissan to ever grace our roads.

50th Anniversary Edition GT-R celebrates a half-century of probably the most iconic Nissan to ever grace our roads.

MOTORING NEWS - I remember it well. As I was being strapped into the passenger seat of the late Gugu Zulu’s rally car during a media day on a gravel track at Zwartkops Raceway, he asked me: “Have you ever been in a rally car before?’’ “Many times,” I responded. “On my Playstation.”

His response was priceless. “Playstation? … okay…” he said, doing his best to hide a little giggle. With my head spinning after our little five-minute excursion, I understood Gugu’s amusement. I didn’t make the same mistake when I got behind the wheel of the Nissan GT-R 50th Anniversary Edition in Pretoria last week.

I knew that this real-life experience too will top all those memorable street race victories I recorded playing Gran Turismo. There isn’t a video game in the world – or simulator for that matter – that can mimic the adrenaline activated by a car that is claimed to clock 2.7 seconds to reach 100 km/h from a standstill with the help of its launch control. And driving one for real is more than just a dream come true.

Hearing the engine roar and the turbo whistling as the car shoots through its gears, its immaculate balance through corners and direct steering is pure bliss. As the name suggests, the GT-R 50th Anniversary Edition celebrates a half-century of probably the most iconic Nissan to ever grace our roads. And it has quite an interesting history too. 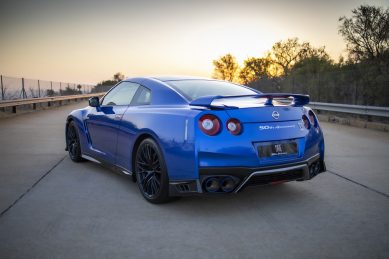 This model earned the nickname “Godzilla” in the Australian press due to its dominance in racing Down Under. The Godzilla moniker, which means ‘’monster from Japan’’, has stuck ever since, but it is frowned upon by GT-R purists for associating it with any other model than the R32.

In actual fact, the manufacturer’s deemed the R35 “unhackable”, but tuners still managed to crack it within hours. The 2020 GT-R is in essence the same car as a dozen years ago, with a few tweaks. 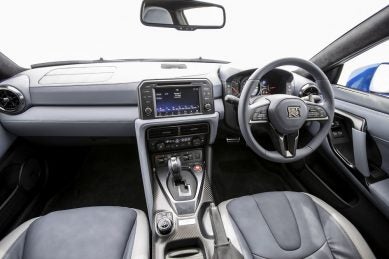 While many believed that the refinement and performance of the GT-R’s 410kW/632Nm 3.8-litre V6 twin-turbocharged engine – each handcrafted by its own takumi technician – were so high that there was no room for improvement, the car’s engineers had a few tricks up their sleeves to get a jump on the tuners.

Among them was incorporating new turbochargers, which help increase the engine’s low rpm response due to an abradable seal, providing tighter clearances and a 5% increase in efficiency.

Overall, they provide even sharper engine response in and out of corners, making the driving experience more rewarding and richer than ever before. The exhaust manifolds, inspired by racing technology, have optimised turbo flange attachment points, which allow for easier servicing and potential tuning, without touching the exhaust manifold.

The signature exhaust note is the product of a new titanium muffler, featuring titanium finishers with burnished blue tips. The updated GT-R also features a revised six-speed dual-clutch transmission with a refined “R mode”, made for both road and track.

The adaptive shift control is programmed to change shift schedules to fit the user’s driving style, making it possible to drive according to the law on public roads, with full brute force available on the racetrack, without needing to manually change shift modes. 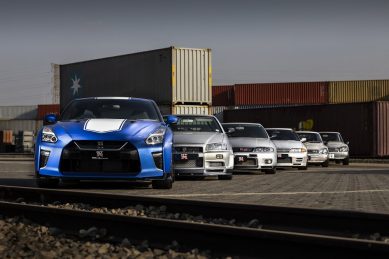 The centre dashboard integrates navigation and audio controls and an eight-inch touch-panel monitor which graphics has actually been designed by the creators of Gran Turismo, showing how Nissan values the game’s association with its icon.