Who should fix barriers? 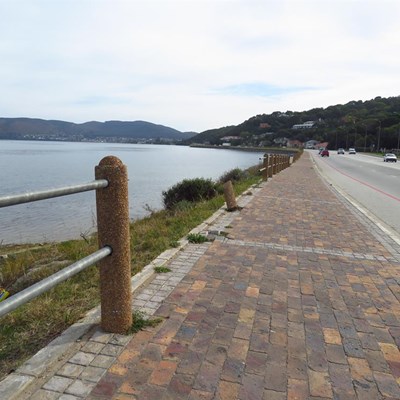 From this gap in the barrier across the entrance to Azalia Street, up to the turnoff to Old Cape Road, it seems there is no authority that takes ownership for the maintenance thereof. Photo: Stefan Goosen
KNYSNA NEWS - The mystery around which authority, local or provincial, is responsible for a certain section of the N2 leading into Knysna from the direction of George has become even more confusing this past week.
In the previous edition of the Knysna-Plett Herald (KPH) neither the Knysna municipality, nor the SA National Roads Agency Limited (Sanral), nor the Western Cape department of transport and public works claimed responsibility for three separate gaps in the barriers/handrails running along the N2 – the so-called smile greeting visitors to Knysna.
On Wednesday, May 31 after the KPH had gone to print, spokesperson for the Western Cape department of transport and public works Byron La Hoe confirmed that his office maintains the road from “the white bridge, where the N2 becomes Trunk Road 2 Section 10, to the robots at intersection of Old Cape Road.”
“At that point the road becomes Main Road 2 and is therefore the responsibility of the Knysna Municipality. The handrail was recently repaired at the Old Cape Road intersection by the maintenance staff of this office. The rest of the damage falls within the portion of Main Road 2,” La Hoe said.
Again, the KPH sent a query to the Knysna municipality, with the above information attached.
To this acting municipal manager of the Knysna municipality Johnny Douglas responded by stating that the municipality performs maintenance on Knysna Main Road between Azalia Road and George Rex Drive.
“The Provincial Government/SANRAL are responsible for the rest of the road. There is no agreement between the provincial minister or head of department and the municipality declaring otherwise.
A letter to Mr Rabe (Western Cape department of transport and public works), sent on March 13, 2012, confirms the above. Mr Rabe is unfortunately mistaken. In fact the barrier is currently being fixed by people who are not contracted or employed by the municipality,” said Douglas.
Taking this into account that would mean that the section of N2 between Azalia Road and Old Cape Road seemingly belongs to nobody?
Click here for a previous article: Knysna barriers badly damaged
ARTICLE & PHOTO: STEFAN GOOSEN, KNYSNA-PLETT HERALD JOURNALIST
'We bring you the latest Knysna, Garden Route news'