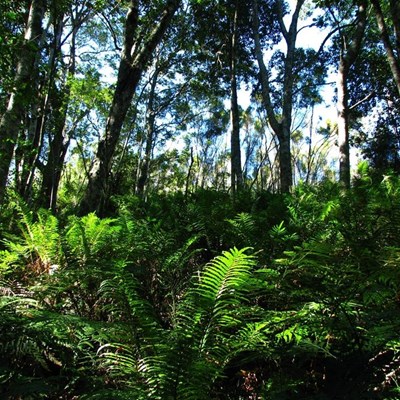 The Knysna forest is attractive to visitors for its ancient indigenous trees and plants.
SOUTHERN CAPE NEWS - SANParks is now managing indigenous forests transferred by the department of forestry for conservation. Spanning across some 60 500 hectares of land, the Southern Cape indigenous forests stretch from George to Tsitsikamma and are found on moist south facing slopes and in river gorges.
The forests that now form part of the Wilderness section include the Farleigh Forest Estate, as well as areas between George and Knysna River. The Knysna section includes the former Knysna National Lake Area and the former Diepwalle Forest Estate which lies between Knysna River and Plettenberg Bay, consisting of Gouna, Ysternek Nature Reserve, Diepwalle, Fisantehoek and Harkerville.
The former Tsitsikamma Forest Estate includes the areas to the east of Plettenberg Bay, Bloukrans, Lottering, Storms River, Blueliliesbush, Witelsbos and the Loerie Nature Reserve. These are the largest complex of indigenous forests in South Africa.
Additionally 22 forest areas are now managed by Mountain to Ocean (MTO). Approximately 19 800 hectares will be transferred to SANParks. Half of these hectares have already been transferred to and will be rehabilitated to extend fynbos areas.
SANParks Scientists have recorded and documented in the State of Knowledge report (2015) the presence of more than 30 terrestrial habitat types, representing more than 50 forest and fynbos communities within the boundaries of the GRNP.
The forest is a haven for 465 species occurring in the forest areas, over 22 species of amphibians, 24 reptile species, 305 species of birds and some 42% of South Africa's 290 mammal species. At least 7,1% of the Park's mammals are listed as endangered (EN) and 14% as vulnerable (VU).
Mystical forests attractions
The Knysna forest is attractive to visitors for its ancient indigenous forests. The King Edward Big tree in Diepwalle, the Dalene Matthee Memorial, the Hoekwil Big tree and the 1000 year old Tsitsikamma Big Tree all attract visitors to the park.
Hiking trails (12 Green Flag status hike in Tsitsikamma and Natures Valley and 2 in Knysna) - day and multi-day nature walks in all 3 sections of the GRNP (Wilderness, Knysna and Tsitsikamma). These are suitable for individuals and groups alike.
Cycling trails in Harkerville and Homtini go through forest and fynbos areas of the Park. There are routes for advanced cyclists in Harkerville as well as easy family routes such as the recently launched Graspad (Harkerville) and Gold nugget (Goudveld).
Camping is available in Diepwalle, Ebb & Flow Rest Camp, Diepwalle, Natures Valley and Storms River Rest
Camp
Events (trail runs) include the Otter trail run, Southern Cross, the Harkerville night run. Cycling events include the GR 300, RECM, K2C and others. There are 34 events a year throughout all sections of the Park. 'Adventure is in our nature' is the Park's motto to encourage adventurers to the Park.
Forest excursions: Zip lining through tree canopies in Tsitsikamma with canopy tours, segways with the Kingfisher Trail in Wilderness and Tsitsikamma forests, scootours in Goudveld are all concessionaires operating in the forest areas of the GRNP.
Tea gardens in Diepwalle and Goudveld are closely located to museums detailing historical cultural accounts of the forest.
Threats to the forests
Although forests are resistant to alien invasion, in 2012 Johan Baard recorded 39 invaders in the forest.
Article supplied by Nandi Mgwadlamba, communications manager, SANParks: Garden Route National Park
One of the elusive Knysna elephants.
Many leopards roam the lush forest.
'We bring you the latest Garden Route, Klein Karoo, Hessequa news'