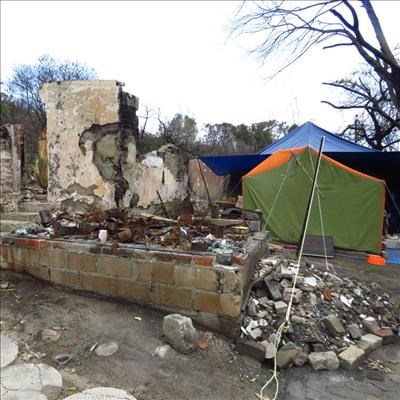 The ruins of the house Lynda Gussenhoven and her family lived in before the fires.

The authorised agent of property owner Visigro Property Development, Michael Wurbach, says: "As indicated to you, any reference to tenants, historic or otherwise, needs to be retracted publicly by your publication as it is factually incorrect."

He goes on to explain: "No inhabitant of any of the structures which existed prior to the fire and subsequently destroyed by the fire had any legitimate claim of tenancy, nor was there ever any agreement, written or verbal between the landowners, whether directly with Mr John Stergianos (director) or myself as the owner's authorised agent since the ownership of this property by the development company."

Wurbach says, "The company has owned the subject property for nearly a decade now and during this time I have been tasked with the acquisition of development rights to the property, which have and are now vested.

"This implies that the development company will in the near future exercise these rights which we trust will add significant value to the village and the site which we view as the gateway to the valley.

Additionally, the unfortunate misuse of the media and social media have previously labelled the developers as irresponsible and reckless with no regard to either the valley and its intrinsic natural beauty or the narrative of the valley and greater Knysna being espoused by these illegal occupants.

Wurbach says to this, "None of this could be further from the truth – we believe ourselves to be responsible and unashamedly ethical in our approach and as such have consistently exhausted every avenue to ensure that any action taken is done within the framework of the legal system.

"The illegal occupants have however consistently abused this process, which has resulted in any such efforts by us being lengthy and frustrating, to say the least.

"We have empathy for those illegally residing on the property, however, their 'situation' should not be recklessly embraced by persons within either the village or aid agencies believing that they have 'rights' regardless of what the illegal occupants may be saying at this point in time.

"They have and continue to manipulate these parties which have the best intentions, albeit with limited background – which results in the illegal occupants abusing these persons, agencies and organisations.

"It is and remains our intention to properly demolish the remnants of the buildings which remain in accordance with the already issued demolition order as provided by council, however we now await the confirmation of the demolition order by another authorising stakeholder (we need to ensure proper compliance before acting) before we will proceed to take down the remnants of these structures for reasons of safety, particularly since a picture clearly shows a minor playing among these destroyed and burnt out structures.

"We are appalled by the inaction of agencies such as community services and child welfare which I have approached for assistance.

"These agencies permit these minors to be subjected to living conditions which the illegal occupant herself describes as being without basic services – this in itself is a clear violation of the constitutional rights of these minors.

"It is imperative that any publicly circulated publication embrace the ethos of responsible and factual reporting, and the article, as already indicated to you telephonically has inaccuracies.

"I am trusting that I can rely on your undertaking to both print a correction on the front page and then also to undertake a deeper investigation of the facts before printing an article which we both know will undoubtedly result in elevating emotions – which result in clouded judgements."