Pirates of the Covidian

KNYSNA NEWS - As crime spirals out of control in Knysna town and suburbs, and just in case we thought it might be safe and peaceful on the water – think again, as the estuary has become a fertile hunting ground for pirates.

Six yachts that are moored at the Knysna Yacht Club have been ransacked in the last three weeks, with the biggest heist taking place this week, on the night of Monday 20 July.

The Knysna Yacht Club premises have also been repeatedly and brazenly hit time and time again since the beginning of the Covid-19 lockdown in March.

Vice commodore of the yacht club, Michael Jacobs, gave Knysna-Plett Herald a guided tour of the crime trail which started about three months ago and which he says has now escalated “out of control”, especially since the lockdown curfew hours were reintroduced. “Of course there’s nobody around between 9pm and 4am so burglars sneak around on rubber ducks which don’t make a noise.”

Clubhouse hit
“First, three spotlights around the clubhouse went. Then aluminium masts and booms started vanishing. A mast costs about R10 000 and is cut up for scrap which probably only fetches a couple hundred rand, if that,” says Jacobs who has just installed two new spotlights to illuminate the car park where boats and trailers have also been pilfered.

Eleven trailer wheels and brass rowlocks (the brace that attaches an oar to a boat) have also gone walkabout. There have also been various incidents of petty crime reported by club members.

The catamaran Yrumoar, owned by a New Zealand couple, was the first to get cleaned out during the night at the beginning of the spree some three weeks ago.

Alcohol, all supplies, a television set, tools and even soaps and toiletries were taken. Boats Xanadu and then Golden Gain were plundered in a similar fashion, which Jacobs labels “organised crime rather than just plain theft by hungry people”.

Ironically a rubber duck belonging to local DJ Lew Vermaak was used as the vehicle for some of the crimes. His duck was stolen from the Waterfront and used to carry and then park loot on a yacht called High Spirits. Owner Dudley Isaac got the surprise of his life when he became the recipient of three dinghy-loads of stolen goods.

And once the criminals were finished with the rubber duck they took the 1 500 horsepower motor. 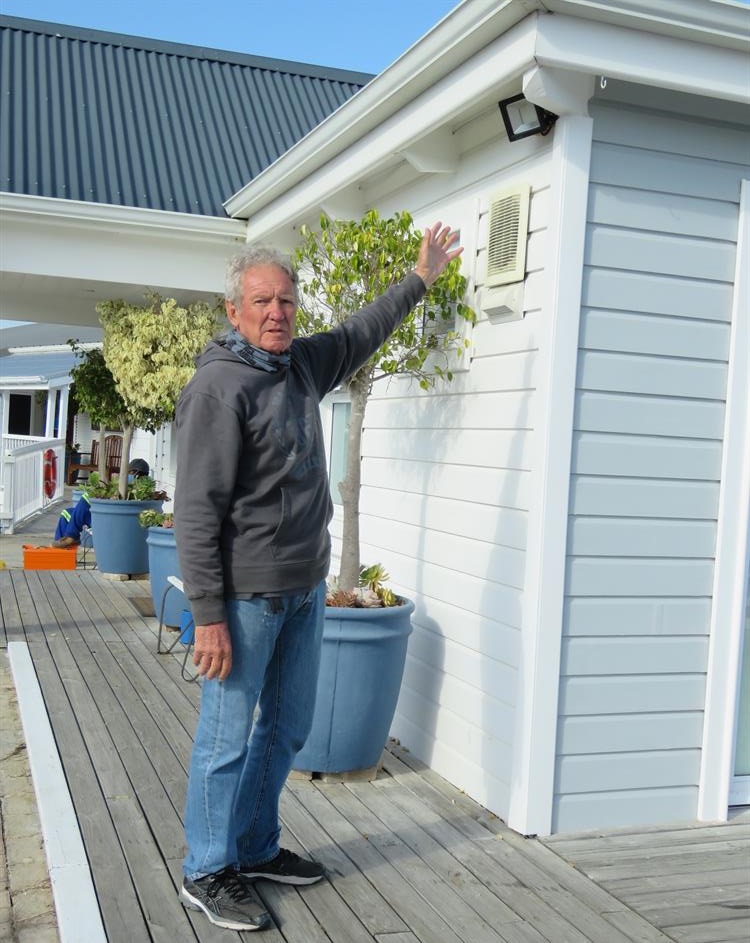 Vice commodore of the Knysna Yacht Club, Michael Jacobs points at the places where spotlights were stolen from the clubhouse. Photos: Elaine King

More boats targeted
The next boats to be hit were Izimoya, Grace and most recently Lara Bella this week.

So rampant has the crime become that the Knysna Yacht Club has had to employ security company Allsound for guards from 18:00 to 06:00 every evening.

“Members have had to club in and pay R16 000 for their basic safety as this comes at a time when the club is closed and membership to the tune of hundreds of thousands has been lost, not to mention revenue from food or the bar,” says Jacobs.

Owner of Lara Bella, Ocean Sailing Charters' Neil van Deventer is devastated by what he calls a “double whammy”. “Just when we have been so hard hit having lost our charters since March, this happens.”

Van Deventer says he took Lara Bella, which is the flagship of his company, out of the water on Sunday 19 July to work on it. “I was worried about leaving it, but went home to Plettenberg Bay. At midnight I got the phone call and half-an-hour later when I arrived the thieves had already escaped,” he says.

The loot taken from his catamaran, parked near the slipway, included all his clothes, fishing equipment, sailing equipment to the value of R15 000 (which is worth nothing or has probably been thrown away), a radio, speakers, lights, electrical fittings, expensive power tools, blankets and coffee among others. “I would say at least R70 000 worth of equipment,” says Van Deventer.

All thefts have been reported to the Knysna police and are being investigated with no arrests having been made yet.