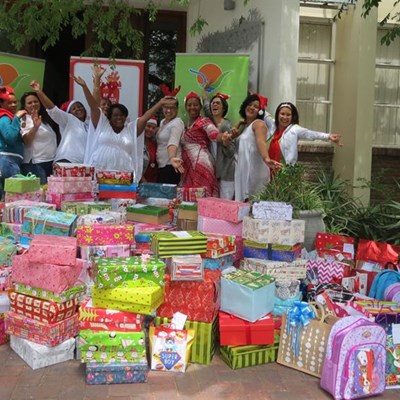 Knysna mayor Eleanore Bouw-Spies is surrounded by municipal staff full of good cheer after collecting 250 Santa Shoeboxes for less privileged children. Photo: Supplied
KNYSNA NEWS - Knysna mayor Eleanore Bouw-Spies and municipal staff, with the help of like-minded residents, have started the festive season's spirit of giving by handing more than 250 Santa Shoeboxes to project coordinator Kelly Picken recently.
Since late September, staff and councillors were encouraged to partake in this initiative by donating either a box filled with goodies or individual items for children less privileged. Each department nominated a representative who assisted the mayoral office in coordinating this project.
The mayoral office ran an internal competition, challenging all staff and councillors. The winning departmental coordinator stood to win a day of pampering. Employees took up to the challenge, with Santa Shoeboxes streaming in thick and fast from various municipal departments throughout greater Knysna, and the precious gifts were handed over outside the municipal buildings on Friday, November 4.
Bouw-Spies expressed her gratitude to all those who kept the spirit of giving alive. “I am so thankful and grateful to be surrounded by such a team and caring residents of greater Knysna. Thank you all for extending your hearts to those less fortunate.
The Santa Shoebox Project originated in Cape Town in 2006 with an initial 180 shoeboxes being donated. Over the past decade it has grown significantly, with the number of Santa Shoeboxes donated reaching over half-a-million.
The boxes are distributed to more than a thousand recipient facilities, through more than 60 satellites around South Africa and Namibia.
'We bring you the latest Knysna, Garden Route news'