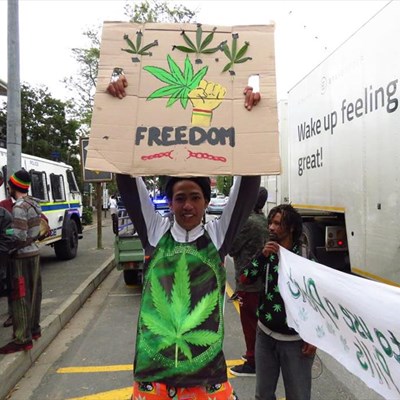 This pro-cannabis supporter wants the freedom to use cannabis.

KNYSNA NEWS & VIDEO - Knysna’s Main Street was painted red, yellow and green last week as a group of peaceful, pro-cannabis supporters marched to the police station to hand over a memorandum meant for both the police and the municipality.

The Eden Cannabis Heritage Walk 2017 kicked off at Kathy Park in George Rex Drive on Friday 22 September, with the main slogan of the walk being “stop putting us in cages”.

Supporters came from as far as Cape Town to join with locals of different backgrounds and ages in a walk to bring about change regarding the way cannabis users are treated by police officials in general.

Supporters say there is no reason why someone should be arrested and “put in a cage” for the personal use and growth of cannabis.

Spokesperson and event organiser Brother Maxi as he is known, said that there are many benefits to using marijuana – not only for religious purposes as Rastafarians do. These include medical advantages, he said.

“We want officials to have more tolerance when it comes to the possession of dagga. It is part of our heritage, and we don’t want to be put in a cell for living the way we do.

"The road to legalisation has been a long one, and hopefully there is some light at the end of the tunnel for us,” said Brother Maxi.

Co-organiser Marylou Botha said the reason for the protest walk was mainly to object to the unfair treatment received by Knysna's poorest people who are usually on the receiving end of outdated oppressive prohibition laws.

"These are gentle, nonviolent people who cannot afford legal assistance and who usually suffer this oppression quietly.

"It was their day to express their frustration at the slow pace of law changes being made, laws that need to change to be in line with our constitution," she said.

Including Brother Maxi from Knysna's own House of Judah, other pro-cannabis advocates were on hand to spread the message.

They were Ras Tautau from the Rastafari United Front, Anthony Colley of Fields of Green for All and local activist Bruce Botha.

The memorandum that was handed over to authorities contained, among others, pro-cannabis literature and medical reports, and nine points that the organisers of the walk wanted to bring to the authorities' attention.

It read: "We ask all authorities in South Africa to henceforth act as informed and conscious citizens at all times, in relation to the issue of cannabis, whether in uniform or out of uniform, and to support a cannabis legalisation paradigm in South Africa that will:

A large contingent of police were present during the walk. At the time of going to print a request for comment from the Knysna police was not yet answered.