Now you see him, then you only saw him: Willemse is now officially not Knysna's mayor for at least a few days pending the outcome of his court interdict against his deposition

KNYSNA NEWS - Genial springtime blathering was replaced by an eerie silence in the empty passages surrounding Knysna mayor Mark Willemse's office the past week after municipal manager Dr Sitembele Vatala decided to declare the mayoral post vacant – some days before the deadline requested by Willemse's legal council to prepare an interdict challenging his suspension by the DA (and subsequently his booting as mayor).

Municipal spokesperson Christopher Bezuidenhoudt told KPH earlier this week "it is safe to say that Knysna has no mayor",

thereby confirming that Knysna would be rudderless for a few days until the possible successful outcome of an interdict application on Friday 11 October (or if it fails, until council eventually elects a new mayor).

When the DA terminated Willemse's membership on 30 September, the decision to disband the mayoral committee (and thus Willemse as mayor) was left to the MM who officially had 14 days to make the call. Willemse's legal council immediately asked Vitala for 10 days' grace to submit the interdict application at the Western Cape High Court which could, if granted, place on hold Willemse's suspension from the DA (and subsequently the mayoral seat). But after eliciting legal advice, the MM disbanded the mayoral committee and suspended the mayor after seven days, leaving the town mayorless at least until Friday's interdict hearing.

"Normal service delivery is indeed continuing under the leadership of the MM. Greater Knysna residents are still receiving daily services," Bezuidenhoudt explained, but indicated that the regular course of municipal functioning has simultaneously been disrupted by Vatala's decision: "Matters of oversight and policy may be at a standstill because no meetings can take place. This is because mayoral committee members are also chairpersons of the Section 80 committees, and meetings scheduled for this month will not be able to take place, due to the dissolution,'' he said. 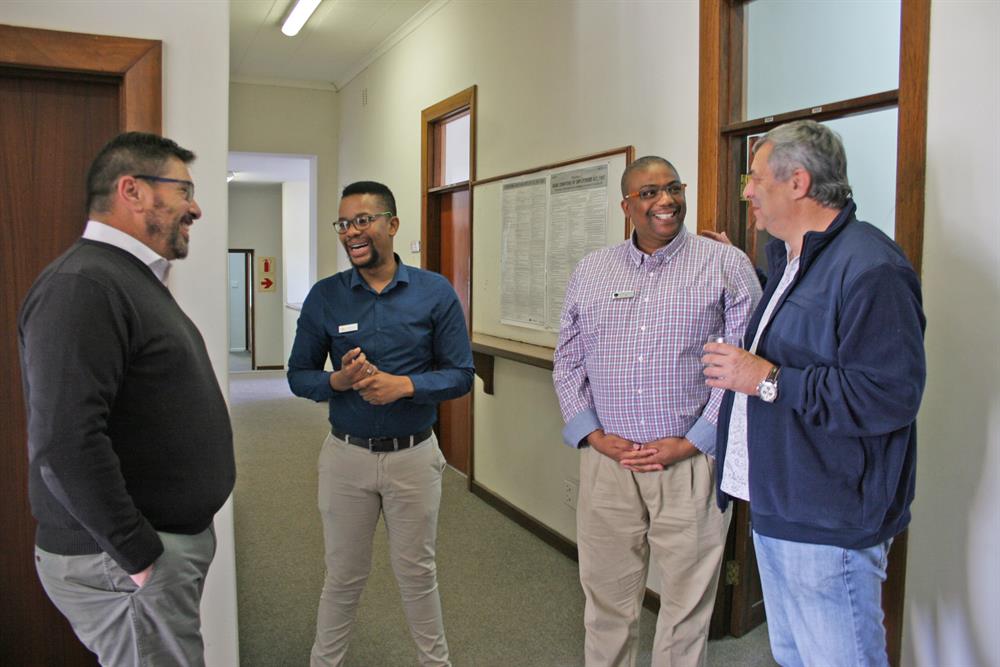 The genial atmosphere at the mayor's office was disrupted this week when the mayor found he'd lost his seat at least for a few days. Seen here is Mark Willemse alongside communications officers Dibandlela Nkume and Christopher Bezuidenhoudt and councillor Peter Myers. Photo: Lee Jay