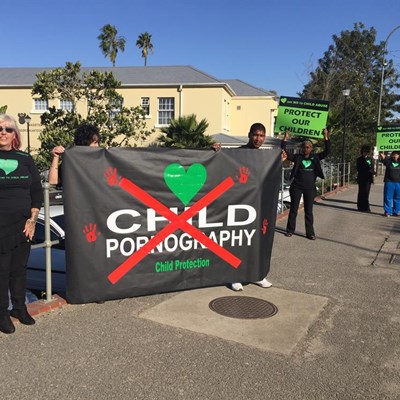 Not only do the Green Hearts drive awareness campaigns around child abuse and support victims of these crimes, but they also stage peaceful protests at courts when suspects appear. Photo: Yolande Stander
PLETTENBERG BAY NEWS - While Plettenberg Bay-based group Green Hearts have been actively involved in fighting against child abuse for more than a year, there are still those who do not know what the organisation stands for.
Spokesperson Yvette Wilschut said several residents decided to establish the nonprofit organisation after a Plett computer engineer was arrested in January last year over alleged links to an international child pornography network involving the distribution of images depicting abuse of babies.
“We decided that something had to be done,” Wilschut said.
The group’s main objectives include prevention and awareness campaigns on the Garden Route and assisting victims of abuse.
“We try to educate parents to enable them to equip their children with the necessary skills to keep safe. We also educate children, from preschool to matric, to enable them to recognise dangerous situations and how to deal with them. Over and above that, we also supply a variety of visual materials including colouring pictures, info leaflets, T-shirts and flyers to children to help them understand the concept of protective behaviour in their daily lives.”
Wilschut said in terms of assistance to victims, some Green Hearts members were trained victim support counsellors and were called in to assist young victims at the Plett police station when a crime had been reported.
“A new court is being built in Plettenberg Bay and will have two courts allocated to sexual offences. We are lobbying for one court to be dedicated to children and that the room they wait in be child friendly.”
The Green Hearts are also involved in therapy sessions with traumatised children. “Some of these children are currently in the court system or had cases removed from the court roll due to the lack of evidence.”
Wilschut said they had had some success in terms of awareness over the past year. “Our members have already attended and are certified in various preventative behaviour programmes, which we are now implementing in schools in the Bitou region. T-shirts, colouring pictures and info brochures are being handed out at schools and other gatherings, and awareness around our children’s plight is also being created in the community through marches.”
Some of the campaigns the organisation has been involved in include the establishment of a local family crime and sexual abuse unit.
“With the help of the Plettenberg Bay community we acquired success through petitions and protest marches, opposing bail for a child molester.
We also assisted in prioritising the psychological assessment of a suspect arrested for the rape and murder of an eight-year-old girl from Plett. He was number 118 on the waiting list and was moved to the top after we came on board. He was later handed a sentence of 21 years behind bars.”
Wilschut said through various fundraising events, they had also been able to send traumatised children for therapy sessions.
“We have also been attending all court cases relating to child molestation, child abuse images, sexual assault and murder in the George, Knysna and Plettenberg Bay region. We do this not only to assist victims and their families, but also to ensure, through communication with the courts and prosecutors, that no case is ‘lost in the system’.”
Wilschut said the laws protecting children, especially those dealing with manufacturing, possession and distribution of child pornography, were “totally ineffective”.
“We have raised this with the Justice Department and during June this year the Green Hearts was approached by the office of the Minister of Justice to join in workshops, together with the SA Law Reform Commission, on changing inadequate and antiquated laws on child pornography."
Click here for a previous article: Nonprofit organisation against child abuse
ARTICLE: YOLANDé STANDER, KNYSNA-PLETT HERALD CORRESPONDENT
'We bring you the latest Plettenberg Bay, Garden Route news'