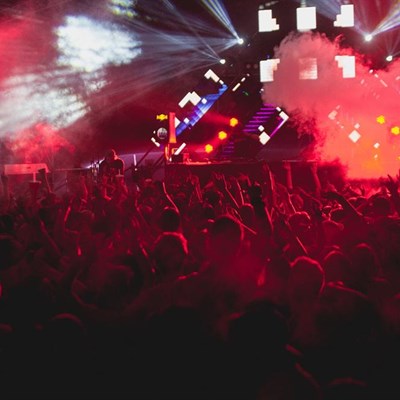 The Plett Summer Festival got off to a festive start with Plett Rage on December 2, with a performance by South African music legends Goldfish. Photo: John-Henry Bartlett
PLETTENBERG BAY NEWS - If you happen to be in Plettenberg Bay over the summer holiday, you most definitely will not be bored as the town has a jam-packed summer programme to cater for every taste.
Plett Tourism recently released the Plett Summer Festival programme, which includes a wide variety of events – from performances by some of South Africa’s best musical talent and rocking parties to sports events and art exhibitions.
Ringing in the season and kicking off the summer programme was Plett Rage, which kicked off on December 2 and runs until December 9. The event has become one of the biggest student festivals in the southern hemisphere and attracts thousands of school leavers every year.
This year’s programme includes performances by music legends such as Goldfish, Sketchy Bongo, Phfat, Grimehouse and popular DJs Roger Goode and Fresh.
Electronic band GoodLuck is also back again this season for their Get Lucky Summer tour, which will include five gigs on the lawns of the Beacon Island Hotel. They will be performing on December 11, 19 and 26, and January 2 and 8. They will share the stage with several other artists, including Matthew Mole and The Kiffness.
Local venues such as The Barnyard also has a packed holiday entertainment programme, with stars like Joshua na die Reën, Soli Philander, Rockolution, Rocco de Villiers, Bouwer Bosch, Mike McCully & The Harmonix, Robin Auld and Wendy Oldfield, Steve Hofmeyr, CrashCarBurn, Stef Bos, Mark Haze and Jesse Clegg performing throughout the holiday period.
For the more creative and fashion-forward, Plett’s first 24 Hour Reunion – a fusion of fashion, photography and film – will be held for the second time this year. It was first hosted as part of the Plett MAD Festival in July.
At 06:00 on December 10, Plett designers, photographers and models and will gather for a fashion showcase at The White House venue at 6:30, followed by an afterparty for the remainder of the 24 hours.
Local artist Martin de Kock will also exhibit his work at Milkwood Framing and Gallery between December 9 and 14, while Myfanwy Bekker will be exhibiting at the The Studio Lookout Centre on December 20.
For the more active there are several sporting events, including the Kurland Summer Trail Run on December 11, which includes several events, from a 16 to 18km run over mountainous terrain, Jeep tracks and singletracks, and a 11.5km run that will include Jeep track and "some climbing”, to a 5.5km fun run and a 1 to 1.5km kiddies forest and field adventure trail.
Polo enthusiasts can also look forward to the opening of the polo season at Newstead Wines on Decmber 12, and subsequently the Kurland Polo Cup final on December 16. The annual and popular polo parade through the town’s main street will take place on December 17.
The Sabrina Love Challenge between December 20 and 22 is another highlight on the summer sport calendar.
There will also not be a shortage of New Year’s Eve celebrations including events at The Barnyard, The Meadows, Surf Café, Central Beach, the Kwanokuthula Stadium and The Med Seafood Bistro.
* Info: www.plett-tourism.co.za
Read a previous article: Jam-packed summer programme in Plett
'We bring you the latest Plettenberg Bay, Garden Route news'