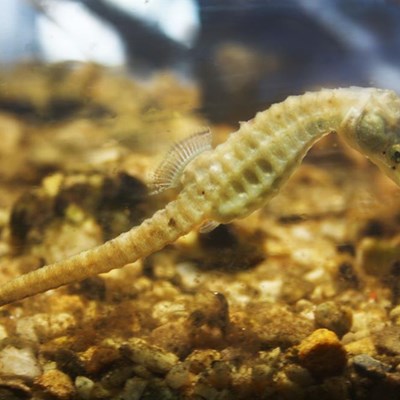 This Knysna seahorse lives in a tank at 34° South at the Knysna Waterfront. Photo: Mark Taylor.
KNYSNA NEWS - The Knysna seahorses (Hippocampus capensis) are being threatened in the only home they know, the Knysna Estuary.
It has now been confirmed that the poaching and selling of the Knysna seahorses is a threat to their survival. Although SANParks's spokesperson, Nandi Mgwadlamba did not want to elaborate much on details of this serious matter, she confirmed that it is under scrutiny by law enforcement agencies in the area.
While some specimen of these protected creatures have been found in the Keurbooms and Swartvlei estuaries, sightings there have become increasingly rare and therefore the Knysna Estuary is regarded as their only true habitat. Historical and anecdotal records indicate that this species could previously be found in Klein Brak, Groot Brak, Goukamma, Groot, Kromme, Kabeljous and Gamtoos estuaries but surveys conducted in 2001 and 2003 could find no evidence of them there.
The Knysna seahorse is an endangered species according to the International Union for Conservation of Nature's (IUCN) Red Data List and it is a protected species under the South African Environmental Management Biodiversity Act of 2004.
According to the Red Data List, "The species is experiencing continuing decline in the extent of occurrence, area of occupancy, quality of habitat, and number of locations in which it is found. The species is also experiencing extreme fluctuations in its area of occupancy."
On Wednesday, April 22 Mgwadlamb confirmed via email that the recent deaths of seahorses may be related to either poaching and illegal selling of seahorses and/ or the salt levels of the water in which the seahorses live.
According to Johan de Klerk, area manager of the Knysna section of the Garden Route National Park (GRNP), salinity is an important factor in determining many aspects of the chemistry of natural waters and of biological processes within it.
"This is why our scientists keep such a close watch on the salinity of the water over the years."
On the issue of seahorse poaching, Mgwandla again confirmed on Tuesday, April 28 that law enforcement agencies, including the South African Police Services (SAPS) are aware of the poaching factor and busy investigating it.
Fears that our seahorses are being poached were rekindled last month when when two dealers unknowingly tried to peddle two live seahorses to one of the patrons of the Knysna Estuary, a member of the Knysna Basin Project (KBP), Mike Davies, on March 18.
Louw Claassens, KBP citizen scientist, said: "Davies, was approached by two locals on the long street bridge towards Thesen Islands. They had two live seahorses for sale. They did not indicate why they were selling the seahorses. Davies insisted that they free the animals, which they did, whereafter he informed them that it is illegal to collect seahorses from the estuary."
The Knysna Seahorse Status (KySS) project forms part of Claassens' PhD study through Rhodes University. She emphasised that it is illegal to disturb, handle or remove any seahorses from its natural estuarine habitat. "The Knysna seahorse is iconic to Knysna and all locals should stand together in protecting this amazing animal!"
On April 7, barely three weeks after the two men tried to sell the seahorses to Davies, SANParks and KBP were shocked again when a young Knysna resident found three dead seahorses in the vicinity of Red Bridge. Around the same time SANParks' senior ranger for Knysna, Owen Govender discoveres an illegal crab net and dead seahorses in its vicinity. Upon the young Knysna residents find of three dead seahors, Govender said that the crab net "might be the cause of the death of several seahorses in the Red Bridge area".
Market
In 2012, eBay banned the sale of all seahorses, dead or alive, from all its EU sites, according to a report on www.dailymail.co.uk. But by then many seahorses had been sold illegally every year, often to be used in Chinese medicines and herbal remedies.
In 2013, it was reported in the Journal of Food and Drug Analysis, that a study in Taiwan found specimen of the endangered Knysna seahorse among the eight seahorse species identified when 58 dried seahorse samples were collected from 23 Chinese herbal shops across Taiwan. The seahorses were identified using molecular forensics. "The seahorse, which has a unique appearance and exhibits male pregnancy, is a useful component of traditional Chinese medicine (TCM). With the growing demand for TCM, vast amounts of seahorses are harvested from the wild every year and traded internationally," the Journal of Food and Drug Analysis reported at the time.
While traders in live seahorses for private aquariums are clearly more careful since becoming aware of the precarious status of the Knysna seahorse and consequent legislation, a web search makes it clear that there was and still is a demand for Hippocampus capensis, especially mated pairs. Some traders insist that their specimen are captive bred. While this may be true, the fact remains that their ancestors could only have come from this corner of the world.
A type of fish
All seahorses belong to the genus Hippocampus, from the Greek words for horse (hippos) and sea monster (campus). The literal translation of Hippocampus capensis is 'horse sea monster of the Cape'.
Govender says that seahorses are a type of fish. "They breathe through gills; use their fins to move through the water and hatch from eggs. The unusual arrangement of their fins makes seahorses slow swimmers therefore they rely on camouflage to escape detection by predators."
Anyone who spots any illegal activity in and around the estuary must urgently call rangers on 044 302 5646, or 044 382 2095 after official working hours.
SANParks regional ecologist, Jessica Hayes, says that there are currently 17 research projects related to the Knysna estuary, of which two deal directly with seahorse research.
This illegal crab net may have caused the death of many Knysna seahorses.
'We bring you the latest Knysna, Garden Route news'
Posted on: 08:00 Thu, 30 April 2015
Your Comments

100 %
No: We should be able to live our lives normally