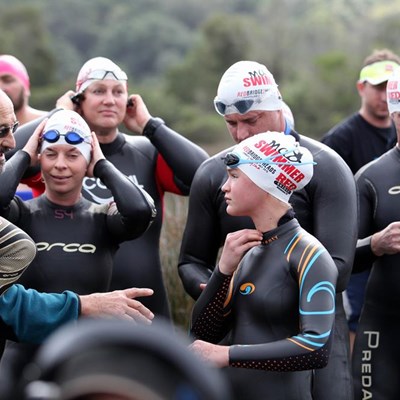 Water temperatures ranged between 14 to 16 degrees Celcius and the wind came up during the swim making conditions challenging for the Madswimmers.
KNYSNA NEWS - A group of 30 swimmers from around South Africa lived up to the name, Madswimmer, when they took on icy water and strong wind to swim more than 14km in aid of a Knysna children’s charity on Saturday, July 11.
Madswimmer is a non-profit organisation that raises funds for various children’s charities by participating in extreme open water swims including inter-continental crossings and secondary open water events.
Some of these daring events include all six recognised intercontinental swims including from Asia to North America and Asia to Africa.
“Then we also do smaller events in aid of local charities, like the swim in Knysna on Saturday,” founder Jean Craven said.
The group – including 13 who attempted to do the epic swim solo while the rest completed the distance in a relay – took to the water at the Red Bridge in Knysna just after 13:00 and swam all the way to the National Sea Rescue Institute office at the Eastern Head.
“Water temperatures ranged between 14 to 16 degrees Celcius and the wind came up during the swim making conditions challenging. Of the 13 who attempted to undertake the journey solo, six finished while the rest fell in with the other relay swimmers.”
Among those who braved the water was South African Olympic swimmer Gerhard Zandberg.
“None of the swimmers however were discouraged by the conditions or the fact that the swim incidentally coincided with National Shark Week.”
Swimmers only reached the finish line after between 2 hours and 48 minutes, and three hours and 45 minutes in the water.
What made this feat all the more 'mad' was that about a third of the group participated in the Momentum Cape Argus Knysna Forest Half-Marathon earlier in the day, before getting into the water.
The money raised through the event – through a combination of entry fees and corporate sponsorship and other donations – will benefit the Sinethemba Youth Development Centre in Knysna as well as a deserving up and coming development swimmer.
Madswimmer was founded by Craven in 2009 after he won a R100 000 wager to swim across the Strait of Gibraltar connecting Europe to Africa. Not wanting to take money from his friends he and co-swimmer Tim Ziehl decided to donate it to charity and so Madswimmer was born.
Since then they have successfully completed all six recognised intercontinental swims, crossed the 38km Lake Tanganyika, 18km Sterkfontein Dam and the highest water body in Africa on Mount Kenya and raised more than R3.7-million for charity.
“We’re out to prove what normal everyday people can do when they put their minds to helping others. Our hearts are anchored in South Africa. We will cross the deepest oceans to promote development here. In transforming ourselves in the process, we like to think we’re transforming our country from the inside-out.” Craven said.
Madswimmer’s main annual swim will be in December on Mount Ojos del Salado in Chile, the highest lake in the world at 6 400m above sea level. The Ojos swim might be a world first attempt where two extremes, altitude and cold, will be combined and chain saws might be used to cut open ice.
And as a warm-up swimmers will attempt to swim 34km from Zanzibar to Tanzania in October.
From left are Russel Gaynor, Olympic swimmer Gerhard Zandberg and Bradley Reen. Photos: Ewald Stander.
Madswimmers want to prove that anybody can help others.
'We bring you the latest Knysna, Garden Route news'

17 %
Learners should be given a choice