SWD EaGirls through to IPL finals 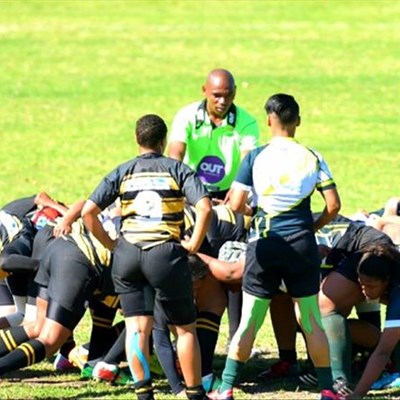 This matchup was the highlight of a full day of rugby, entertaining the huge crowd that came out for the game. Four U16 girls' 7s games, two senior women's club 7s games, a men's 7s game, the U18 girls showing off their 7s skills, and an interschool derby game between Concordia High and Knysna Secondary schools set the scene for the big provincial game.

The EaGirls drew first blood with winger Nicolene Barendse showing her speed and class to score under the post, but Boland soon started to fight back and kept the EaGirls under pressure, leading to the Boland fly half scoring for her team's first try.

By half time, after an unconverted try by Andrews, the EaGirls were in front 19-5.

Only after 25 minutes into the second half would the EaGirls score again via a pass from Atheana Botha. Boland started to fight back and scored two quick tries to bring them within seven points of the EaGirls with five minutes left in the game.

Faith Gosling secured victory with a classic wing try using her blistering speed and elusive side stepping to score under the post. Marnezelle Rabie, former Springbok fullback, converted the try to give the EaGirls a well-deserving bonus point win and qualifying them for the Saru B-division final.

"As a community-based organisation it has always been our mantra to help build locally, and we know this time of year the tourism sector is normally down. This is where sports tourism can play a huge role," said coach Aschin Klein.

According to Klein, about 1 000 athletes and fans from all over the Western Cape came to Knysna to take part in this game.

"It was also a great moment for our local women's rugby supporters to see our local heroes in action," he said.